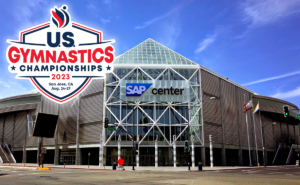 The annual national championship event for artistic gymnastics in the U.S. will take place at SAP Center at San Jose and will determine the men’s and women’s junior and senior all-around and individual apparatus national champions. The National Congress and Trade Show will run concurrently at the San Jose McEnery Convention Center.

“The San Jose area has a longstanding history of partnering with our sport, and we can’t wait to return in 2023 with our season’s marquee event,” said USA Gymnastics President and CEO Li Li Leung. “The U.S. Gymnastics Championships are a prime opportunity for fans to get to know the gymnasts who hope to represent Team USA at the 2024 Paris Olympics, while our annual National Congress and Trade Show brings together thousands of community stakeholders from around the country.”

“We are excited to welcome back USA Gymnastics and the nation’s gymnastics community for the 2023 U.S. Gymnastics Championships in what promises to be an amazing event showcasing the top gymnastics talent in the United States,” said Jonathan Becher, President of Sharks Sports & Entertainment. “SAP Center at San Jose has a tremendous record of hosting successful, world-class gymnastics events including a sold-out U.S. Olympic Gymnastics Team Trials in 2016.”

The U.S. Gymnastics Championships feature the country’s top artistic gymnasts and will take place less than a year before the start of the Paris Olympic Games. Previous winners include Olympic medalists Bart Conner, Paul Hamm, Jonathon Horton and Danell Leyva, among others, on the men’s side, and Simone Biles, Shawn Johnson, Nastia Liukin and Shannon Miller in the women’s division. The U.S. Men’s and Women’s National Teams will be named following the competition.

The accompanying National Congress and Trade Show provides more than 2,000 attendees access to valuable educational opportunities, including seminars and live demonstrations focused on a range of topics spanning coaching, judging, general business, sports science, fitness and nutrition, athlete safety and more. Meanwhile, the trade show hall is a space where gymnastics professionals can connect with vendors who provide goods and services to the community.

“We are thrilled for our Northern California gymnastics community with USA Gymnastics’ decision to host the 2023 U.S. Championships in San Jose,” said John Poch, Executive Director of the San Jose Sports Authority. “Our region loves their Olympic sports as evident from our track record of hosting premier events at SAP Center. We are extremely thankful for our partnerships with Visit San Jose, the San Jose Marriott and SAP Center to bring the championship back to our city.”

Tickets for the U.S. Gymnastics Championships will be available for purchase at a later date. If you are interested in receiving ticketing updates, please sign up here. Registration for the 2023 National Congress and Trade Show will open early next year. Visit usagymcongress.com and usgymchampionships.com for additional details, including hotel information for Congress attendees.