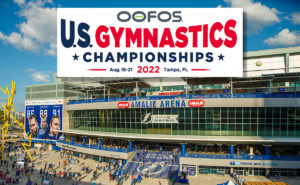 The 2022 OOFOS U.S. Gymnastics Championships feature the country’s top artistic gymnasts and serve as the culmination of the domestic season. Nearly 150 athletes will compete across men’s and women’s junior and senior divisions, and champions will be crowned based on combined two-day totals. The USA Gymnastics National Teams will also be named at the event’s conclusion.

“We are excited to bring our first national championships of the new Olympic cycle to Tampa,” USA Gymnastics Chief Programs Officer Stefanie Korepin said. “The sport’s landscape has seen a tremendous amount of change and opportunity over the last 12 months, and we are already less than two years away from the Paris Games. With returning Olympians, exciting breakout stars, and a bonus system in place to incentivize high difficulty in the men’s competition, this year’s OOFOS U.S. Gymnastics Championships will be more competitive than ever.”

Men will compete Thursday, August 18 and Saturday, August 20, and women will take the floor Friday, August 19 and Sunday, August 21. Junior gymnasts will begin each day at 1:30 p.m. ET followed by seniors at 7 p.m. ET.

Senior men’s and women’s Day 1 will air live on Olympic Channel: Home of Team USA. The final day of senior men’s competition will be broadcast live on CNBC and will also air on tape delay on NBC Sunday at 12:30 p.m. ET. NBC will broadcast senior women’s Day 2 Sunday in real time. All senior competitions will also stream live on Peacock.

For a complete list of broadcast and streaming information, visit https://www.usgymchampionships.com/info/.

Ahead of senior competition Friday, Saturday and Sunday, the FlipZone fan festival will fill Thunder Alley just outside Amalie Arena. From 4:30-6:15 p.m. ET, fans can learn about the fundamentals of gymnastics by visiting various stations and will be treated to live demonstrations. Engaging kid-friendly activities and food and beverage options will also be available in the FlipZone, and members of the University of Florida women’s gymnastics team will be on hand to sign autographs Sunday from 4:30-6 p.m. ET.

Autograph sessions featuring current and former National Team members will take place onsite at Amalie Arena or in the FlipZone on each day of competition, including but not limited to Olympic all-around champion Suni Lee, Chiles, the 2020 U.S. men’s Olympic team, NCAA champion Trinity Thomas of Florida, Wong and other current Gators including Sloane Blakely and 2017 World all-around champion Morgan Hurd.

Participating athletes are listed below alphabetically by division. For bios of the athletes, click here.