Malone on top on Day 1 of the 2022 OOFOS U.S. Gymnastics Championships 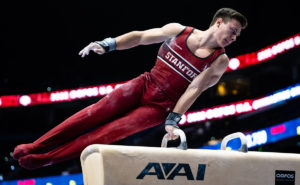 Hong’s 16.630 on vault and 14.729 on floor exercise landed him on top of the apparatus leaderboards, while Whittenburg was the leader on still rings with a 15.422. The University of Illinois’ Ian Skirkey (Pepperell, Mass.) set the tone on pommel horse with a 15.743, and Curran Phillips (Naperville, Ill./Stanford University) delivered the day’s high score on parallel bars with a 16.999.

USA Gymnastics’ men’s program bonus system, which was introduced in early 2022 is once again in effect at this year’s national championships. The system awards athletes additional points for performing select high-difficulty elements.

The OOFOS U.S. Championships continue Saturday at Amalie Arena with junior women’s Day 1 competition at 1:30 p.m. ET on FlipNow Powered by USA Gymnastics followed by senior women at 7 p.m. on Olympic Channel: Home of Team USA. The men will be back at it Saturday, as all-around and apparatus champions are crowned. The Men’s Junior and Senior National Teams will also be named.