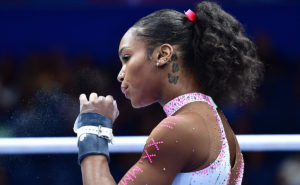 TAMPA, Fla. (August 19, 2022) – Shilese Jones (Auburn, Wash./Ascend Gymnastics Center) holds the lead after the first day of senior women’s competition at the 2022 OOFOS U.S. Gymnastics Championships at Amalie Arena. Her 57.200 has her in the top all-around spot, edging WOGA Gymnastics’ Konnor McClain (Las Vegas, Nev.) who is second with a combined 56.400.

The women will be back in action Sunday where winners will be crowned and gymnasts will be named to the 2022-23 Junior and Senior National Teams.

Men’s competition concludes tomorrow with juniors kicking off the event at 1:30 p.m. ET on FlipNow Powered by USA Gymnastics. Senior men will follow live on CNBC at 7 p.m. ET. The 2020 U.S. Men’s Olympic Team will also be honored at Amalie Arena on Saturday.

Updated scores and competition information can be found on usgymchampionships.com.