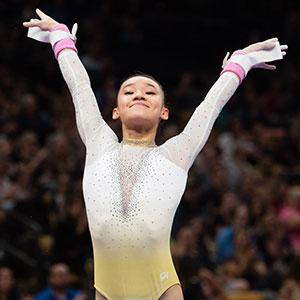 Her goal was simple in its ambition. “I was just looking forward to hitting eight-for-eight clean routines,” Leanne Wong said. On Sunday afternoon at the U.S. Gymnastics Championships at Boston’s TD Garden she came close enough that she claimed the U.S. junior women’s all-around title and added her name to the list of contenders for the squad for the 2020 Olympics in Tokyo.

“Next year I’ll be a senior and I’ll have to work up to making the world team and hopefully I can get to Tokyo,” said the 14-year-old from Overland Park, Kans., who won floor exercise and placed second on vault and uneven bars for a total of 112.250, more than a point ahead of Kayla Di Cello. “I need to upgrade all my routines and clean up all the skills I have.”

Wong, who won last month’s GK U.S. Classic crown, came here as the favorite and carried a lead of half a point into the finale. “The first day was a great start and helped me feel confident going into the second day,” she said.

Wong’s steady 14.250 on bars kept her comfortably ahead of Di Cello (111.200), who won vault with a 14.900 effort to break a three-way tie for second. “Today I was really happy with how I did,” said Di Cello, who was 26th at last year’s nationals. “I felt more confident coming into this meet than I did last year.”

Placing third (111.050) was Sunisa Lee, who won on bars and tied for second on beam. “I’ve been training a lot more, getting really consistent,” said Lee, who was eighth last year. “Just focusing on one thing at a time and making myself better.”