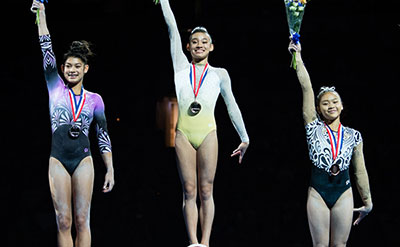 Wong earned 55.850 points on the second day to secure the junior women’s all-around title with a two-day total of 112.250. Kayla DiCello of Boyds, Md./Hill’s Gymnastics, placed second with a total of 111.200, and Sunisa Lee of St. Paul, Minn./Midwest Gymnastics Center, rounded out the top 3 with a score of 111.050. The individual event winners are listed below.

The U.S. Championships determines the men’s and women’s U.S. champions and U.S. National Teams for the junior and senior elite levels. The championships also will serve as part of the selection process for the U.S. Team for the 2018 World Championships.