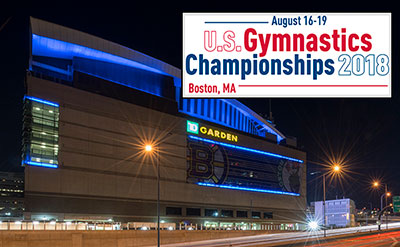 INDIANAPOLIS, Aug. 14, 2018 – Boston’s TD Garden is the destination for the country’s top male and female gymnasts for the 2018 U.S. Gymnastics Championships, the national championships for men’s and women’s gymnastics. Scheduled for August 16-19, 2018, the U.S. Gymnastics Championships, part of the Team USA Summer Champions Series, presented by Xfinity, determines the men’s and women’s U.S. champions and U.S. National Team for the junior and senior elite levels. To celebrate the 10th anniversary of their success at the 2008 Olympic Games, the men’s and women’s 2008 U.S. Olympic Gymnastics Team and alternates will be recognized following the women’s competition on Sunday, Aug. 19, prior to the medal ceremonies.

The championships serve as part of the selection process for the U.S. Team for the 2018 World Championships, and the gymnast who will compete in men’s gymnastics at the 2018 Youth Olympic Games in Buenos Aires, Argentina, will be determined in Boston.

Event information
The four-day competition schedule, which is subject to change, is outlined below. All times are Eastern.

All media information (results, historical information, start lists, etc.) will be provided on our website, usgymchampionships.com, during competition week. Live scoring will be available at myusagym.com.