Stage is set for competitive men’s competition at 2018 U.S. Championships 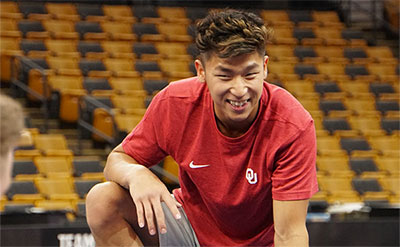 Yul Moldauer noticed an immediate perk after he won his first men’s title in Anaheim last year. “It definitely changed my Instagram followers,” he said. That was then, of course. This is a new season, a different venue, a fresh challenge.

“I don’t like to sit in fame a lot,” Moldauer observed on the eve of the U.S. Gymnastics Championships, which begins Thursday at Boston’s TD Garden. “I like to say yeah, that was really nice. And then I like to move on. It’s a new year, it’s a new championship. Sam’s back, people are healthy. I think this U.S. Championships is going to be fun to watch because there are so many guys doing well this year.”

Sam Mikulak, the two-time Olympian whose four-year all-around reign ended last year when an Achilles injury limited him to two events, is back and gunning for the 2020 Games. “I like this sport,” said Mikulak, who feels he has ample upside remaining at 25. “I don’t want to stop any time soon.”

The current and former champions will be joined by Donnell Whittenburg and Akash Modi, who were alternates two summers ago when the road to Rio was crowded with London veterans. “All the guys who were on the Olympic team with me, they’re gone,” noted Mikulak. “I’m the only one standing right now.”

That leaves plenty of room on the five-man squad for this autumn’s World Championships in Doha, Qatar, the first global team event since the Olympics. “The last quad helped a lot of us new guys get to the level we’re at because we were always chasing those legends of the sport,” said Modi, who’ll be defending his parallel bars crown here. “Now we are the front runners and we have their steps to follow in.”

Whittenburg, who competed on last year’s world team and made the floor final, is coming off shoulder surgery and will limit himself to bars and rings. “It might not be perfect, but I just wanted to come back out here and test the waters, just be on the competition floor again,” he said. “If I can get picked for World team that’ll be great.”

Besides a place on the World team, Mikulak will be going after a fifth crown, which nobody has managed since Blaine Wilson collected five in a row between 1996-2000. “I wouldn’t say it’s something I don’t think about,” he said. “It would definitely be a nice addition, but I don’t think that’s what I’m trying to accomplish through my gymnastics. I’m trying to look into the world scene a little more and if this title comes along in the process, that’s a cherry on top.”

Moldauer, who went on to place seventh in last year’s World all-around and win bronze on floor, figures to be a difficult champion to dethrone, given his fitness and his reputation for clean routines.

“Anything can happen in this competition,” mused Mikulak. “But if anyone’s going to hit six-for-six I can probably put my money on Yul.”

When Moldauer finished fifth at the last Olympic Trials at 19, he was marked as a man on the move, a good bet for 2020. Last year’s title and his global medal confirmed it. “I definitely have more confidence, but I still don’t want to think: ‘I medaled, I’m good enough,'” he said. “That was a blessing but now it’s, ‘Are we as a team going to medal this year?'”

Along with their own national titles, the junior men will be vying for the sole U.S. men’s gymnastics berth at this autumn’s Youth Olympic Games in Buenos Aires. Among the favorites are Brandon Briones and John Chou, who won junior elite titles in May.

“It definitely gives me a lot more confidence coming out of that competition having done my best,” said Briones, who missed last year’s U.S. Championships after breaking his leg.

Chou finished sixth in last year’s all-around for the 15-16-year-old division and won the pommel horse and parallel bars titles. “Just getting that experience, coming here doesn’t feel as stressful as it did last year, the first time competing at this stage,” he said. “I feel more ready, more relaxed.”

Both Briones and Chou will be starting college next year, but they’ve been thinking about the Olympics for the last two quadrennia. “At least eight years,” says Briones. “You’re thinking about what I need to be at that level, setting yourself up. Each season you have to be able to make strides in your difficulty. You have to be able to go to international competitions to get that confidence competing outside of the country. So that’s all preparation toward your end goal.”