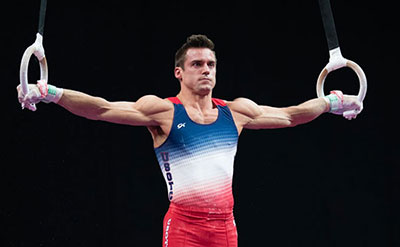 Mikulak, who has four U.S. all-around titles to his name, posted an 85.150 total for the top senior men’s all-around score after the first of two days. Akash Modi of Morganville, N.J./Stanford University, earned an 84.100 to land behind Mikulak, and Allan Bower of Mesa, Ariz./University of Oklahoma, completed the top three at 83.850. Donothan Bailey of Mission Viejo, California/U.S. Olympic Training Center, and Alec Yoder of Indianapolis /Ohio State University, were fourth (83.550) and fifth (83.400), respectively. Yul Moldauer of Arvada, Colo./University of Oklahoma, the defending all-around champion, was sixth at 82.700.

For the juniors, Isaiah Drake of Los Angeles /Gymnastics Olympica USA, and Riley Loos of El Dorado Hills, California/Technique Gymnastics, lead the junior men’s 15-16 and 17-18 all-around rankings, respectively, after the first of two days. For the 15-16 division, Drake posted a 77.350 total. Taylor Burkhart of Morrison, Colorado/5280 Gymnastics North, earned a 77.200 for second, and at 77.000, Nicolas Kuebler of Seattle/Metropolitan Gymnastics, is currently in third place. Loos’ 78.950 put him atop the 17-18 division’s all-around rankings. Vitaliy Guimaraes of Arvada, Colorado/University of Oklahoma, edged out Spencer Goodell of Tigard, Oregon/University of Oklahoma, for second, 78.550 to 78.500.

Event information
The remaining competition schedule, which is subject to change, is outlined below. All times are Eastern.