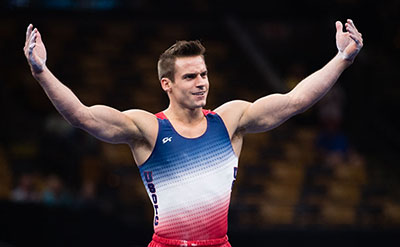 As a group they were not quite ready for prime time on a steamy Thursday night in mid-August. Too many wobbles and bobbles, slipped hands and unsteady landings. How hit-and-miss was the men’s first day at the U.S. Championships at Boston’s TD Garden? Sam Mikulak fell off the high bar and came off the pommel horse and still led the senior field by more than a point.

“Today wasn’t too hot,” acknowledged the two-time Olympian, who’s bidding for his fifth all-around title this week. “I had more mistakes than I would have expected to have, but I feel like it’s only up from here. Saturday, it shouldn’t be hard to beat today.”

It was a night when defending titlist Yul Moldauer finished second on vault and third on rings but was 19th on high bar and 20th on horse and found himself sitting in sixth place. “You need to come into these things prepared and obviously I just wasn’t prepared enough,” said Moldauer, who has been dealing with a balky back but refused to use it as an excuse. “But you can’t think about that now. We have Day 2 so I’ve got to focus on that. Just come back stronger.”

On a night marked by pratfalls and shortfalls, there still were displays of consistency. Akash Modi, a Rio alternate, placed second on floor and third on parallel bars and high bar and placed second overall. “All I want to do over four days of competition (including Worlds selection camp) is go 24-for-24,” he said. “No misses. Little bobbles here and there to be expected, but hit every routine and I think I’m ready to do that.”

In third was Allan Bower, last year’s runner-up who was in contention for the lead until he struggled on high bar on the final rotation. “I had pretty good confidence coming in with a good performance last year,” he said. “But it’s a new meet and I wanted to treat it like that. Here and now.”

Donothan Bailey, who’s in fourth ahead of Alec Yoder, was second on parallel bars and high bar and third on vault. And Olympic alternate Donnell Whittenburg, who’s working his way back into form after shoulder surgery, was encouraged by his outing on rings, where he was sixth. “It all comes with repetition and endurance, which I definitely need,” he said. “Day 2 I feel should be better. I got a feel for it. I know what to expect now.”

Mikulak, who had to concede his crown last year when an Achilles injury limited him to two events, was pleased to be able to perform on all six this time. “I was able turn it on,” he said. “I never really got down on myself. On to the next one.”

Mikulak was in first place midway through and was figuring on breezing through his high bar routine when he hit the mat. “I got a little antsy on that Cassina,” he said. “I was kicking myself in the butt because I don’t think I’ve missed that skill in probably six months. That routine’s so easy for me.”

Then, after placing first on floor, Mikulak botched his horse. Yet when the chalk dust had settled, he’d still posted an 85.150 ahead of Modi’s 84.100. “I don’t know how anyone else was, but I think the fact that I’m in first right now speaks that it really wasn’t too good of a day for anyone,” Mikulak said. “So I’m hoping that we can all turn it up with a little more energy going into Saturday. We’ll have a bigger crowd and a little more meaning and purpose for that one.”