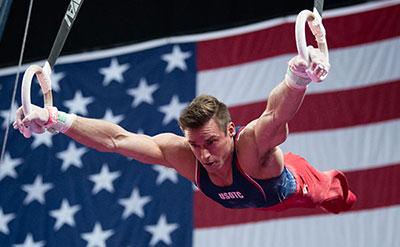 This was the Sam Mikulak that everyone saw during the last Olympic year when he was healthy and able to push himself through a dozen routines in two days. This was why he decided that he still has the essentials and the enthusiasm to go for a third quadrennium.

“It’s a wonderful stepping stone,” the 25-year-old Mikulak said Saturday afternoon after he’d dominated the field to win his fifth men’s all-around title by nearly five points at the U.S. Championships at Boston’s TD Garden. “I have to say this is probably my favorite one that I’ve won so far because I feel like I’m in a different place in my confidence in my gymnastics. Being able to ride this going into World Championships will definitely set me off feeling a little bit more confident.”

After a haphazard opening night on Thursday, both Mikulak and Yul Moldauer, last year’s titlist, asserted themselves with authority in the final. Mikulak (172.900) increased his Day 1 total by 2.6 points, prevailing on floor, parallel bars and high bar while Moldauer (168.150) finished second on floor and vault and third on still rings and parallel bars.

“I felt I had something to prove after Thursday’s performance,” said Moldauer, who was sitting in sixth place after Day 1. “That’s why you have to have a reset button. You’re going to have a rough day but you can’t hold on to that. You’ve got to come forward from it. However you’re going to react is how you’re going to perform in the future. Just knowing that I could reset and come out here and perform how I wanted to perform helped my confidence.”

The top seven in the all-around qualified for the national team. In addition to Mikulak and Moldauer, Allan Bower (166.950), Donothan Bailey (166.800) and Alec Yoder (166.550), who finished 3-4-5 and were separated by just four tenths of a point, plus 2016 Olympic alternate Akash Modi (165.550) and Cameron Bock (163.200). The five-man team for October’s World Championships in Doha, Qatar, will be determined at next month’s training camp in Colorado Springs.

“This is a young group and we’ve all got a lot to prove,” observed Mikulak, the only holdover from the squad that placed fifth at the Rio Olympics two summers ago.

Mikulak, the first man to collect five titles since Blaine Wilson won that many in a row between 1996-2000, will be looking to compete at his third Games in Tokyo in 2020. He would have been heavily favored in last year’s Championships but an Achilles injury limited him to just pommel horse and high bar, where he finished second and third.

This year Mikulak was hale and uncommonly hungry. Even after falling off high bar and coming off the horse on Day 1, Mikulak still led by more than a point but was deeply dissatisfied. “I just felt relieved,” he said. “I put a lot of pressure on myself today because I did not want a similar performance as Thursday. I really wanted this to be a proving-myself type of day.”

After starting off by winning on floor, Mikulak finished with a flourish, taking both parallel bars and high bar and jumping exuberantly off the podium with several celebratory fist pumps. “I definitely put myself out there to exude as much energy as I could,” he said. “But I think we all came together. You could tell that everyone wanted to be a part of it today.”

After a flawed opening outing by his charges, Brett McClure, the men’s high-performance director, was heartened to see enhanced resolve in the final. “I got to see what they’re capable of doing tonight,” he said. “It was a little bit of a wakeup call that we missed an opportunity to perform under a pressure situation in an arena on a podium. I feel like the energy tonight was much more focused. The realization set in like oh, yeah, that’s right, we’re getting ready for a World Championships, and we’re getting ready to qualify to the Olympics. So let’s get it done.”