Loos, Drake set atop junior men’s rankings after day one at the 2018 U.S. Championships 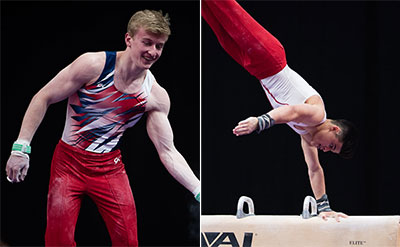 When he made his debut on the big stage last year Riley Loos felt as though he’d just been sprung from a kennel, scrambling and slipping. “I was just a puppy running around,” he said. “This year was so much more fun. I knew what to do.”

This time at the U.S. Championships Loos, a high-school senior from El Dorado Hills, Calif., stayed loose and locked in. And when the first day of junior men’s competition wrapped up Thursday afternoon at Boston’s TD Garden, Loos was in the lead (78.950) ahead of incoming Oklahoma freshmen Vitaliy Guimaraes (78.550) and Spencer Goodell (78.500).

“The whole time I was just having fun,” said the 17-year-old Loos, who came out of third place after the fifth rotation to win the pommel horse (13.200) and move into first. “Last year I remember being so stressed and making mistakes I didn’t want to make,” he said. “This year I just tried going at it with a calm heart and it worked really well.”

Since he was in the same group with his Sooner rivals, Loos, who competes for Technique Gymnastics, could keep an eye both on them and the scoreboard. “Rotating with them was so fun and (assistant coach and 2016 Olympian) Chris Brooks was fun to talk to. His gymnasts are just super-cool.”

Isaiah Drake submitted solid routines on vault (14.000), floor (13.450) and horse (13.000) to top the field in the 15-16 division (77.350), where he holds a 0.150 edge over Taylor Burkhart going into Saturday morning’s finale. “My preparation was pretty solid so I was confident in my routines,” said the 15-year-old Drake, who lives in Los Angeles and competes for Gymnastics Olympica. “I just wanted to hit and be as clean as possible.”

Nicolas Kuebler, who hails from Seattle and trains at Metropolitan, rounded out the top three in the 15-16 all-around rankings at 77.000.