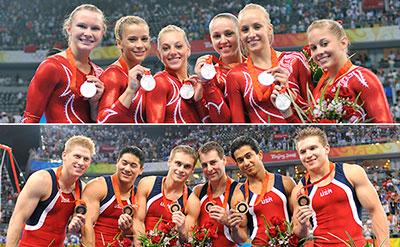 INDIANAPOLIS, Aug. 9, 2018 – Recognition of the men’s and women’s 2008 U.S. Olympic Gymnastics Team and alternates is just one of the in-venue fan activities during the 2018 U.S. Gymnastics Championships, the national championships for men’s and women’s gymnastics, at Boston’s TD Garden. Scheduled for August 16-19, 2018, the U.S. Gymnastics Championships, part of the Team USA Summer Champions Series, presented by Xfinity, features the country’s best gymnasts vying for national titles and national team berths.

2018 marks the 10th anniversary of the 2008 team’s 10-medal performance at the Olympic Games, which at that time was the USA’s most medals since the 1984 Olympic Games in Los Angeles and at a non-boycotted Olympic Games. The medal tally of 10 included two gold, six silver and two bronze. The team will be recognized following the women’s competition on Sunday, Aug. 19, prior to the medal ceremonies.

Event information
The four-day competition schedule, which is subject to change, is outlined below. All times are Eastern.