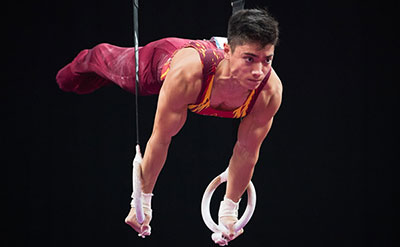 Briones earned 80.000 points on day 2 to move from fourth to first to win the junior men’s 17-18 all-around title with a two-day total of 158.350. Day 1 leader Riley Loos of El Dorado Hills, California/Technique Gymnastics dropped to second with a total of 158.150, and Spencer Goodell of Tigard, Oregon/University of Oklahoma rounded out the top 3 for the 17-18 group with a score of 156.550. For the 15-16 division, Ah Chow, Benas, and Drake all scored 155.350 points across the two days of competition to tie for the title. The individual event winners are listed below.

Event information
The championships determines the men’s and women’s U.S. champions and U.S. National Teams for the junior and senior elite levels. The championships also will serve as part of the selection process for the U.S. Team for the 2018 World Championships.

Single-session and multi-session ticket packages are still available. All prices are per ticket or ticket package and vary in price due to location and session.