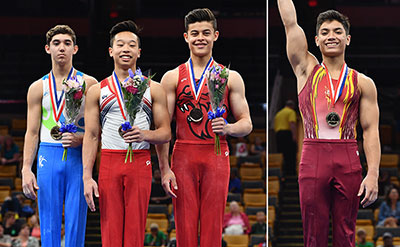 Last year Brandon Briones was among the missing at the U.S. Championships, sitting home while his broken leg healed. “This year I’m just glad to even be here,” he said Saturday afternoon after he’d come from behind to claim the junior men’s all-around title in the 17-18 division. “So to do as well as I did is amazing.”

Equally as startling was the triple dead-heat in the 15-16 category where Isaiah Drake, Fuzzy Benas and Justin Ah Chow all posted 155.350 scores and shared the top spot on the podium. “I have never heard of a three-way tie, said Benas. “So this is like insane for me.”

Briones, whose victory earned him the sole American men’s gymnastics entry for this autumn’s Youth Olympic Games in Buenos Aires, had been in fourth place after Day 1 and still was there after the fourth rotation on Day 2.

But a 13.150 score on still rings and a 14.150 on vault brought his total to 158.350 and moved him past Riley Loos by two tenths of a point. “I didn’t really have an idea,” said Briones, who won the junior elite crown in May. “I was trying to ignore the scores and do the best I could on each routine.”

Loos, who’d been third in the 15-16 division last year, led after the first day and was ahead after each of the first five rotations on Day 2. “I knew the whole time,” said Loos, who had an edge of 1.6 points going into horizontal bar, where he submitted his lowest number (12.350). “I was building myself up there but the last event is one of my weaker events. If I’d stuck the dismount it probably would have worked out for me but that’s okay. It’s just more reason to work hard.”

At the younger level, where Drake had prevailed on Day 1, Benas and Ah Chow swapped the lead all afternoon. “I thought it was going to be pretty close,” said Benas, who was making his debut at nationals. Going into the final rotation Benas was up on Ah Chow by a quarter of a point with Taylor Burkhart and Drake close behind. “I tried not to pay attention to the scoreboard,” said Ah Chow. “It gets in my head and I just overthink things.”

After Benas turned in a 12.700 on high bar, Drake posted a 13.250 on floor. When Ah Chow scored 12.950 on pommel horse, it was all even. Had Burkhart managed another five hundredths of a point on horse, it would have been a four-way draw. “It just shows how absolutely everything counts,” mused Drake.