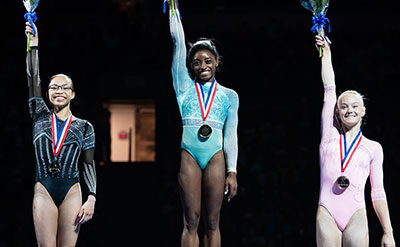 BOSTON, Aug. 19, 2018 – 2016 Olympic all-around champion Simone Biles of Spring, Texas/World Champions Centre, showed she is in a class all her own when she won her fifth senior women’s all-around title at the 2018 U.S. Gymnastics Championships, the national championships for men’s and women’s gymnastics. She not only became the first woman to win five titles (2013-16, 2018) in USA Gymnastics’ history, but she won that fifth title with a 6.55-point margin of victory just eight months after returning to training.

Event scores for the top five in the all-around

The U.S. Championships determines the men’s and women’s U.S. champions and U.S. National Teams for the junior and senior elite levels. The championships also will serve as part of the selection process for the U.S. Team for the 2018 World Championships.