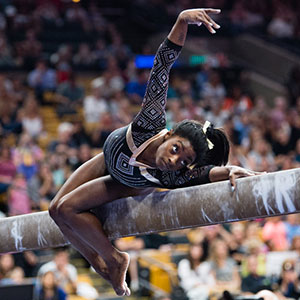 Before she returned from her two-year competitive sabbatical Simone Biles put a note card in her gym locker with the number 60 on it. “We did a mock meet and that’s what we were aiming for,” she said.

And that was the tally that the Olympic gold medalist rung up Friday on the first night of the U.S. Championships at Boston’s TD Garden, blowing away the field with a 60.100 all-around score that was the best in the world since the Rio Games.

“I feel like every event was really good, so I can’t complain,” said Biles, who’s more than three points ahead of world titlist Morgan Hurd (57.000) and is in a commanding position to win her fifth domestic title on Sunday night.

Biles prevailed on all four events, scoring 15.525 average on vault, 15.200 on balance beam, 14.850 on uneven bars and 14.450 on floor exercise, where she lost six tenths of a point for stepping out of bounds twice. But she was particularly delighted by her showing on bars, historically her weakest apparatus. “I wanted to hit bars so bad,” she said. “I was first (up), but I said don’t freak out, it’s okay. Then I hit and I was just so excited.”

For Biles, who began the season not having competed since the Olympics, her performance here was an encouraging milestone on the way to Tokyo and the 2020 Games. “At (last month’s) Classics, I was still easing back into everything and feeling the surroundings and getting used to competing again,” she said. “I feel like today I really embraced it.”

Also pleased was Hurd, who was sixth in last year’s meet but was a solid runner-up on Day 1, finishing second on bars and third on floor. “I’m proud of how calm I was,” she said. “Clearly the nerves are there, but nerves are what keep you going. I felt really solid and I’m happy about that.”

Riley McCusker, who was third last year, was perched there again after placing third on bars and beam. “I came in here a little more nervous today, honestly,” she said. “I feel good now, like I’m warmed up and ready for Day 2.”

Defending champion Ragan Smith, who’s still working her way back from a nasty ankle injury at last year’s World meet and is dealing with several broken toes, was tied for ninth. “It’s been kind of a crazy year so I felt like I need to do it and to prove something to myself,” she said. “I’m definitely coming up. Probably by Worlds, I’ll be there.”

Meanwhile Leanne Wong, who won the younger side of last month’s GK U.S. Classic, leads the junior competition. “It helps because I’ve experienced this before, and I’ve been on a podium before, so it’s not new,” said Wong, who’ll take a half-point edge over Sunisa Lee into Sunday afternoon’s finale.

Wong, who finished second on vault and uneven bars, turned in a winning floor routine to take over the top spot on the final rotation, posting a 56.400 overall score. “I feel great but it’s Day 1, and I still have Day 2 left,” said Wong, whose goal is to ‘hit eight-for-eight and improve everything.’ “And a lot of things can go wrong or right.”

Lee, who was eighth in last year’s meet, upgraded several skills since the GK U.S. Classic and prevailed on bars (14.800) and beam (14.050). “I still have things to clean up but I’m pretty proud of how I did overall,” she said. In third place was GK U.S. Classic runner-up Kayla Di Cello, whose 14.750 on vault was the second-highest score of the day on any apparatus.