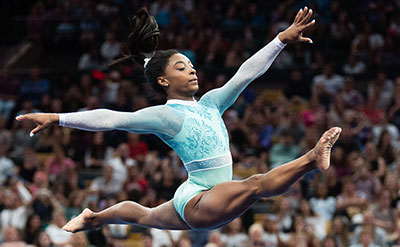 Simone Biles wasn’t sure what to expect from herself coming into this season after her post-Rio sabbatical. “I thought I was going to be a nervous wreck and maybe fall apart,” she said. The Olympic champion certainly wasn’t expecting to leave Boston with a neck full of medals from her first U.S. Gymnastics Championships since 2016.

“I didn’t think coming into the events this year that I would do as well as I did,” Biles said Sunday night after she had won her fifth U.S. all-around women’s title and swept all four events. “I knew I was capable of it, but I kept telling my family, I don’t know if I’m going to be able to calm myself down the way I did before and handle the nerves. But so far, so good.”

Good was a significant understatement. Not only did the 21-year-old Biles set a modern record for the most national all-around crowns, she also became the first woman to win on every apparatus since Dominique Dawes did it in 1994.

“It was shocking then and it’s shocking now, too,” observed Tom Forster, the team’s high-performance coordinator. “It’s incredible. And to actually look a little bit better than she did two years ago is remarkable.”

Biles, whose total of 119.850 points was 6.55 ahead of world titlist Morgan Hurd, posted by far the biggest margin of her five triumphs. What was more impressive, though, was her dominance of the medals podium. “I guess I’m really shocked by the bars title,” she said. “Just because there are a lot of strong bar swingers here.”

After taking a lead of more than three points into the second day, Biles opened with a 14.550 on bars, followed by 14.900 on balance beam and a 14.700 on floor before finishing with a 15.600 on vault. “She’s just in another league, almost,” said Riley McCusker, who finished second on bars and third on beam and in the all-around. “I’m honestly just in awe of her.”

Hurd, who was sixth in last year’s meet, was delighted with her runner-up effort in the all-around. “I feel so great,” she said, after placing third on bars and floor. “I hit eight-for-eight for the first time in all my times of coming to championships. I’m just really proud of myself. I had a few little bumps but I made everything and that’s all that matters.”

With Biles back in golden form and Hurd, Ragan Smith and Jade Carey from last year’s world team still in the mix, the Americans will head to the selection camp for this autumn’s global championships in Qatar with their customary optimism. “We have so much depth that you could literally take anyone,” said Hurd, “and it would be a fantastic team.”