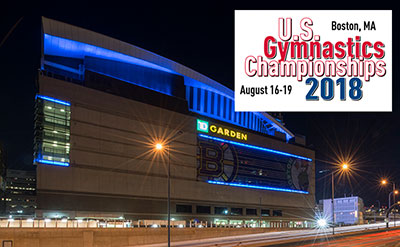 INDIANAPOLIS, May 1, 2018 – Multi-session ticket packages for the 2018 U.S. Gymnastics Championships, the national championships for men’s and women’s gymnastics, at Boston’s TD Garden are on sale now.

Multi-session ticket packages, with pricing, are detailed below, along with the all-session package that is still available.

The four-day competition schedule, which is subject to change, is outlined below.

TD Garden, owned and operated by Delaware North, first opened its doors to the public on September 30, 1995. In the 20-plus years since, the venue has generated more than $365 million in direct economic impact to the Greater Boston region from its major national events alone, not including its high-profile Bruins and Celtics tenants. The arena has played host to countless marquee events, including the Democratic National Convention, NHL All-Star Game, NCAA Frozen Fours, NCAA Women’s Final Four, U.S. Olympic Trials – Gymnastics, U.S. Figure Skating Championships and ISU World Figure Skating Championships among others. Delaware North, owner and operator of TD Garden, is one of the largest privately-held hospitality and food service companies in the world. Founded in 1915 and owned by the Jacobs family for more than 100 years, Delaware North has global operations at high-profile places such as sports and entertainment venues, national and state parks, destination resorts and restaurants, airports, and regional casinos.