Smith powers to top score at the P&G Championships 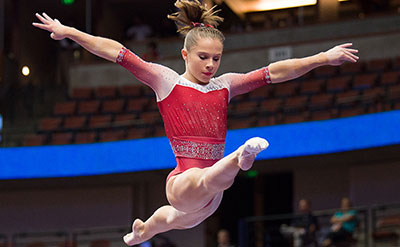 ANAHEIM, Calif. – Ragan Smith charged down the vault ramp to open the fourth rotation at the P&G Gymnastics Championships on Friday and launched herself toward the senior level’s first one-day all-around score to eclipse 57 this year.

The favorite to win the national championships, Smith was at her best when it counted. While three junior gymnasts – all from the United States – have posted a score of 57 or greater this year, no senior had done it until Smith completed her vault and earned herself a 14.400.

At the junior level earlier in the day, Maile O’Keefe posted a 57.200 to lead the competition, while Emma Malabuyo followed closely behind with a 57.050. The only other 57 this year came from Gabby Perea at a competition in Italy.

None of the “Final Five” are competing here this week in the shadow of Walt Disney’s famous amusement park, and Smith took it upon herself to make sure there was nothing Mickey Mouse about the competition.

Simone Biles did make an appearance on the floor for a television interview during rotation two, while Smith made sure to give the competition the star power it needed with her strong evening.

Biles still managed to create a stir of her own, telling NBC Sports Network’s Andrea Joyce that she has indeed returned to the gym two weeks ago.

The owner of four consecutive national titles, Biles’ reduced schedule in a post-Olympic year means there will be a new national champion for the first time since 2012. Smith is well on her way toward becoming that new winner, led by a brand new floor routine, which earned her a 14.200 that topped the field. She also had the top score in the balance beam at 14.500.

“The floor routine was really fun and I had a blast,” Smith said. “I loved smiling to the crowd and they were cheering for me so it built my energy. Every time I made eye contact with somebody (they crowd) was like ‘Woo hoo!’ That helped me. I was like ‘I can do this.’”

The competition had barely returned to action in rotation four when Smith attacked the vault. It could not have been better timing.

“I think everybody wants first up; at least I like first up,” Smith said. “It was a pretty good vault. I could do a little bit better one, but it was good.”

Nobody’s vault was better than Jordan Chiles, who delivered a 15.150 courtesy a soaring Amanar. It was easily the highest score of the day in any event. Jade Carey performed two vaults, earning a 14.700 on the first, then posting a 14.300 when she was unable land on her own Amanar.

McCusker, who led the field with a 14.550 on the uneven bars, was not only pleased to be on Smith’s heels, she was just happy to be taking part in the national championships.

“Let’s just say, I was on crutches and had a wrist cast at the same time,” said McCusker, who wasn’t cleared to start routines until two weeks ago. “I feel like I’ve come a long way since then.”

The official injuries were a ligament tear in her ankle and a growth-plate issue in her wrist. If there was any residual soreness, she wasn’t showing much of it. She considers returning to action Friday the hard part. Sunday’s second day of competition will be a pressure-free bonus.

“I just want to stay focused and calm through the meet and do my gymnastics the way I know how to do it,” McCusker said.

Hurd, who won an all-around bronze medal at the Stuttgart World Cup, slipped on the first day of the national championships following uncharacteristic landing miscues, including one during her floor exercise.

“Those aren’t things I usually struggle on so it could have just been a fluke or something that happened today,” Hurd said. “Just don’t overthink it. Sunday is a clean slate, an open page.”