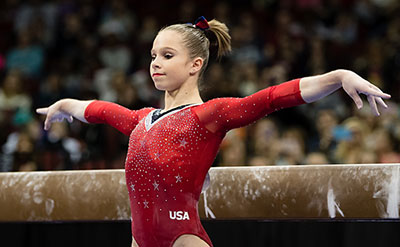 ANAHEIM, California – Ragan Smith knows the timeline well, about how the national championships in a post-Olympic year can reveal a star of the future.

If being a favorite at this weekend’s P&G Gymnastics Championships in Southern California has added any pressure, Smith is resolute in not giving in to it.

“Um yeah, probably there is (pressure), but I try not to think about that,” Smith said this week just before a senior women’s training session. “I just try to block that out and do the gymnastics I know how to do.”

It was four years ago, at the post-Olympic national championships in Hartford, Conn., when none other than Simone Biles emerged as a new gymnastics force. In Rio last summer, Biles walked away with five medals, including gold for team, all-around, vault and floor exercise.

Smith, a fellow Texan along with Biles, will elect to keep her head down and not peek out over the horizon toward Tokyo in 2020. Yet it is hard to deny that things are changing all around her.

“It’s different because now I’m on the top, kind of; I’m not a young baby anymore,” said Smith, the 2017 AT&T American Cup champion, who was an alternate in Rio last summer. “I’m kind of one of the more mature older ones, I guess. So it kind of feels different. If anybody needs help I can tell them to do this or that. Before, that was Aly (Raisman) or Simone telling me to do that.”

Yet nothing is a given, and those expected to push Smith this weekend include Riley McCusker, who took an all-around title in Jesolo, Italy, this spring, and Morgan Hurd, who won a bronze medal in the all-around at the Stuttgart World Cup.

“(Italy) definitely gives me a boost of confidence, to know I have done it in the past,” McCusker said. “I think it’s helped me a lot, just to have those experiences I’ve gone through this year.”

For Hurd, pushing her way toward a talent-laden U.S. senior team has been both challenging and rewarding.

“There is a little bit of pressure there only because the expectations have clearly risen since when (the national team) was starting out as seniors,” Hurd said. “I think it comes from everyone, including myself that the expectations are there.”

Others expected to move closer to the forefront in Anaheim include Alyona Shchennikova, who won the U.S. Classic qualifier all-around in Chicago late last month, and Victoria Nguyen, a silver medalist at the London World Cup.

Making a solid impression as an elite gymnast this year is Jade Carey, who also figures to make her presence known at the national championships this weekend. Making the U.S. team for the World Championships (Oct. 2-8 in Montreal, Canada) is within reach.

“It feels like things have been moving pretty fast, but I think I have been handling it pretty well,” Carey said. “I’m just trying to make every single turn in the gym count and that has really helped me to improve on everything.”

Smith will work on distancing herself from the pack with a revamped dismount on the balance beam (Arabian double front) and an improved double-twisting Yurchenko vault. As her gymnastics ability grows, so does her fame. A solid showing in Anaheim will only increase the attention.

“I’m starting to get more recognized in different places,” Smith said. “People at home recognize me in the grocery store and stuff like that. It’s a little different but that’s really cool. I like the attention.”

With U.S. women’s gymnastics at such an elite level historically right now, Smith knows there is no getting around the recognition.

“This has been really exciting just to be there and compete for USA Gymnastics,” Smith said. “It’s been amazing. To wear ‘USA,’ you feel like you’re standing there in the sparkling, shining light of like a rainbow. It’s been wonderful.”