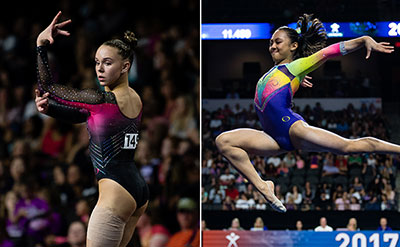 ANAHEIM, Calif. – Calling her junior national championship last year “surreal,” while also likening it to a dream, Maile O’Keefe will have a different perspective as she goes for a repeat title, starting today, at the P&G Gymnastics Championships.

A second consecutive victory would be nice, but what O’Keefe really has on her mind is advancing to the next level.

“I don’t think it gives me much more confidence,” O’Keefe said this week about her junior national championship in 2016. “I’m not trying to win, I’m just trying to make national team. That’s really all that matters to me right now.”

While that might have a little been-there-done-that ring to it, her national team aspirations say plenty about her competitive spirit. For as storied as the U.S. women’s gymnastics has been, the program is as powerful as it has ever been. Working your way into that group is no easy task.

“It’s really exciting knowing that I am coming through at the peak of USA Gymnastics,” O’Keffe said. “And it’s also really tough because you have to keep up to that standard and keep achieving at your best.”

In that sense, it is no wonder that O’Keefe is not satisfied repeating accomplishments from the past. She has so much to achieve ahead of her.

“Mentally, you just have to stay strong and know that you can’t slip and come back or relapse,” she said.

That mentality itself could lead to a back-to-back junior national title, even if she isn’t completey focused on it. Standing in her way could be a potential co-favorite in Emma Malabuyo, the all-around winner at the U.S. Classic in Chicago.

Malabuyo also has national team dreams, admitting somewhat sheepishly that the 2020 Olympic team is in her sights, even if most tend to keep that kind of aspiration somewhat private.

“I’m growing so much, on the bars especially,” Malabuyo said. “I was thinking about a year ago, or even six months ago, ‘I will never be able to do this bar routine.’ But when I got taller, I could see that I was getting stronger, I was getting used to my height and it was easier. I finally started getting new skills.”

And as those five Olympic rings have started to come into focus, Malabuyo continues to add even more difficulty to her routines.