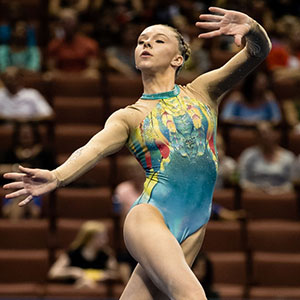 ANAHEIM, Calif. – In a show worthy of primetime, Maile O’Keefe and Emma Malabuyo put on a junior-division duel at the P&G Gymnastics Championships on Friday afternoon that was worthy of being the talk of their sport.

O’Keefe delivered an all-around score of 57.200 on Friday, the first day of juniors at the national championships, while Malabuyo followed closely with a 57.050 as the two favorites delivered as promised and more.

There have been only three women in international gymnastics who have topped a score of 57 all year, and all three have been at the junior level. Along with O’Keefe and Malabuyo on Friday, the United States’ Gabby Perea did it during a competition earlier this year in Italy.

With Malabuyo leading after three rotations, it was O’Keefe’s 14.500 on the balance beam that gave her the all-around lead as the competition reached the halfway point. Only Kara Eaker’s 14.850 on the beam was better on the day, as she rode that score to third place after day one with an overall mark of 55.500.

Despite taking the lead with her work on beam, O’Keefe still saw plenty of room for improvement in the discipline.

“All my other events were just like practice, pretty much, except for my beam,” O’Keefe said. “My beam was a little bit shaky. It’s nice knowing that I can always do better, even though I have the lead. I can’t go into Sunday thinking I have the lead, and that’s OK. I have to stay strong and finish strong.”

While Malabuyo’s consistent scores in the four events ranged from 14.100 to 14.500, it was her 14.250 on the floor exercise that stoked her confidence afterward.

Eaker’s Great American Gymnastics Express teammate Leanne Wong was in fourth place after day one with an all-around score of 54.700, while Adeline Kenlin was fifth at 54.050. Wong had the top score of the day on vault at 14.650.

The opening day lined up O’Keefe for her second consecutive national title, but she continued to say Friday that her priority lies more with making the national team.

“Sunday, I just want to do the same thing, maybe a little better on beam possibly,” she said. “But other than that, I thought I did pretty well.”
Confident she can improve on bean, O’Keefe was excited about the final day of the competition.

“Ending on beam is probably one of the toughest things to do and I’m pretty happy with myself,” O’Keefe said. “But I know that there is always room for improvement.”