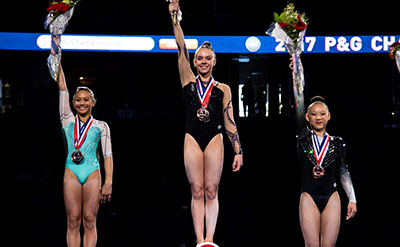 ANAHEIM, Calif. – The future of the USA Gymnastics women’s team appears to be in solid hands, if Sunday’s results of the junior division at the national championships are any indicator.

Maile O’Keefe dominated the two-day, eight-event at the P&G Gymnastics Championships, posting a combined total of 114.450 in the all-around competition. It was her second consecutive national title and the outcome never appeared in doubt.

What does dominance look like? O’Keefe won gold in the uneven bars, and silver in the vault, balance beam and floor exercise. And in those three events where she finished second, her second-day scores were all better than what she delivered in the opening day of competition.

She admits to often thinking about how her talents will translate onto the senior division and will finally get that chance next year. In the interim, she made sure to focus on the task at hand this week.

“I’ve been a junior for five years, this is my last championships as a junior and I just wanted to finish strong and end on a high note,” O’Keefe said. “I want to come back next year as a senior and hopefully I will stay high up in the rankings.”

And in what has turned out to be some ideal timing, O’Keefe will have two full years to get used to the senior level, before the next Olympics year in 2020.

“I definitely think that is a major (positive) for me, not going straight into senior and then having an Olympic year that year,” O’Keefe said. “But it will be nice to get to feel the scene, which will be a little bit different (at the senior level).”

Finishing second was Emma Malabuyo, who scored over 14 in all four events during the opening day Friday, but slipped into the 13s in three of those Sunday, including a drop of more than a full point on the balance beam. Malabuyo not only wobbled early on the beam, she sat down on her dismount, essentially making the all-around outcome a foregone conclusion.

Kara Eaker finished third in all-around with a 111.250 score, while Adeline Kenlin (109.750) was fourth and Leanne Wong (108.250) was fifth. Malabuyo won gold in the floor exercise, Eaker grabbed gold in the balance beam and Wong took the top spot in vault.

Malabuyo admitted to nerves Sunday and said she likely was the victim of trying to be too perfect in the latter stages of the competition. Balance beam was her third event of the day Sunday and seventh of the eight-event competition.

“I think I got ahead of myself and was excited to get off of the balance beam,” Malabuyo said. “I didn’t take it one thing at a time.”

If her faulty balance beam performance taught her anything it was how to leave the past behind her. She moved on to the floor exercise for her final event of the competition, finishing off her gold medal in that event with a score of 13.800, third best of anybody in floor Sunday.

“Just be present and don’t worry about what just happened; you need to move on and let the past go,” Malabuyo said of her floor exercise strategy.
Malabuyo will also move to the senior level next year, along with O’Keefe. Regardless of what the members of the gold-medal-winning women’s Olympic team from last year decide to do, the United States’ run of dominance in women’s gymnastics figures to continue.

O’Keefe’s 57.20 all-around score from Friday and her 57.250 from Sunday are two of just five scores over 57 in international gymnastics this season. And that includes both the junior and senior levels.

Malabuyo posted one of those 57s Friday. The others came from Ragan Smith at the senior level on the opening day of the national championships Friday night, while the other was also at the junior level when Gabby Perea did it at an event in Italy.

Yes, the future is bright indeed.

“Me, Gabby and Emma we were all top three (as of Friday afternoon) and that was quite amazing knowing that we were top three (one-day all-around scores) in the world, even though we’re still juniors,” O’Keefe said. “I definitely watch the seniors and try to add myself into that situation. … Going up to the senior division should just be a natural (progression) that just happens.”