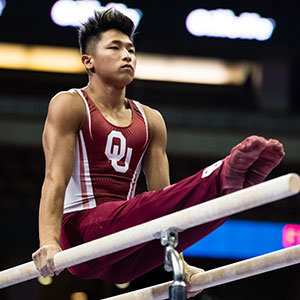 ANAHEIM, Calif., Aug. 17, 2017 – Yul Moldauer pumped both of his fists in front of him, in a move that appeared to be as much celebration as it was to get a jolt of blood back into his upper limbs.

When he followed that with a pair of claps, it was a clear sign that he was pleased with where his opening night at the P&G Gymnastics Championship was headed.

Moldauer, last year’s NCAA all-around champion at the University of Oklahoma, had just finished the pommel horse Thursday when he offered his controlled emotion. It was his fourth event of six on the night, but even before he received his score, it was obvious he was in control of the day.

His combined day one score of 86.650 put him in the all-around lead at the national championships, and gave him the momentum to add another accomplishment to his highly decorated year. Akash Modi (84.700) was second in all-around after the first day, while Allan Bower (84.450) was third, Donnell Whittenburg (84.350) was fourth and Colin VanWicklen (83.950) held on to fifth place.

“Horse is always an event we all struggle on, and I was in maybe the 60 percentile with my routines in practice so tonight when I hit it, it really meant something to me. It made me feel comfortable,” Moldauer said. “It’s making me feel more comfortable and confident in the routine.”

His score of 14.150 on the pommel horse was fifth best on the day. Veteran Alex Naddour posted a leading score of 15.300. But combined with the top score in parallel bars (14.700, tie with Modi) and a floor exercise score of 14.550 that was tied for second best, Moldauer moved into a comfortable lead while competing on the night in a rotation group that included his Oklahoma teammates.

“They’re awesome; they’re great and fun” Moldauer said of his teammates’ support. “It makes things feel a lot more comfortable, and it’s always nice to have a team with you and having guys who are your friends and buddies with you.”

No matter what happens Saturday, the United States will have a new men’s national champion for the first time since 2012. Sam Mikulak, who has won the last four national titles, is only competing in two events after an Achilles injury this past winter.

The two-time Olympian is making the best of his limited schedule. Mikulak finished the opening night tied for second on high bar with a score of 14.050 and third on pommel horse with a 14.750 mark.

Naddour, who also is limiting himself to two events, not only led in pommel horse after the opening day, he was sixth in rings (14.700). Naddour’s goal is to make it on the podium and qualify for worlds, doing his best to put Olympic-type pressure on this weekend’s event.

“I felt the pressure, actually,” Naddour said. “Our rotation was a lot of very, very good pommel guys. They felt the pressure a lot because first event is hard to do and they had some mistakes that they won’t have second day. But I put that pressure on myself, wanted to hit a great set and wanted to go 15.3 or above. I think that is what it’s going to take to get on the podium or even win.”

Mikulak was equally pleased, looking in control on the pommel horse, while delivering his impressive showing on the high bar after just being cleared to land his dismount off the event by doctors last week.

“I was happy,” Mikulak said. “There are still some things I can improve on, but other than that, it was nice to just get back out there. It’s been a while since my last competition. It was Rio and then almost a full event at Winter Cup.

The Orange County native put in his strong showing before a large contingent of family and friends.

“It’s just good to come to this hometown crowd and hit my sets,” he said.

Modi is also trying to embrace this week as something of a hometown meet since the Stanford product goes to school just an hour’s flight away in Northern California. It became a challenge for him early after a mistake on pommel horse, right before rotating to rings.

Knowing that rings require a more deliberate tempo, since holds can’t be rushed, he was able to quell his frustration and get back on track with a 14.600, the seventh best score of the night. Modi’s overall number was helped with the top scores in parallel bars (14.700) and high bar (14.200).

Modi’s approach to rebounding from his disappointment in the pommel horse was more akin to a veteran, even though he is one of the young up-and-comers in the field.

“It was awesome,” Modi said. “Yul took a pretty commanding lead right around rotation one, but it was really good to see a good mix of people from Nos. 2, all the way down to 7. Everybody is pushing really hard, everyone’s trying to make that World team and push USA Gymnastics to be at the top again.”