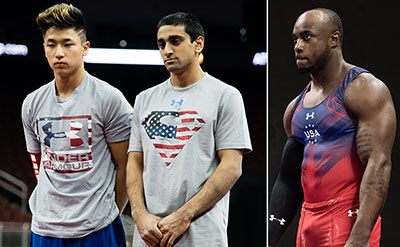 ANAHEIM, California – Sam Mikulak arrived in Southern California this week and made sure his first stop was his father’s house down by the beach.

The four-time defending United States all-around champion will get something of the hometown boost at this weekend’s P&G Gymnastics Championships, having grown up in nearby Newport Coast.

Currently a resident of Colorado Springs, Colorado, what Mikulak will not have is the opportunity to defend his all-around title. An Achilles injury this past winter has reduced Mikulak’s plans this weekend to the high bar and the pommel horse.

“It was nice being back home; it’s comfortable,” Mikulak said. “A lot of people are probably stressed. They’re here, it’s the national championships, they’re in a hotel room, foreign place. But I had the opportunity to just go home and chill. It was pretty nice.”

Mikulak’s limited participation is only part of the reason this weekend also will be a partial showcase for the next generation of USA men’s gymnasts. Changes are coming from a USA men’s gymnastics team that was filled with veterans at the 2016 Olympics.

Youth will be served by 2020 in Tokyo and a trio of gymnasts could be in line for the all-around title in Anaheim, as Akash Modi, Yul Moldauer and Donnell Whittenburg have emerged as favorites.

Alex Naddour, a 2016 Olympian in Rio, says he’s ready for the best the next generation has to offer, while also pointing his attention to the even bigger stage of the World Championships.

“I’m treating this meet as a steppingstone to put myself in the situation of being at a World Championships, or an Olympic Games, and mimic that pressure,” Naddour said. “It’s hard to mimic that. Some guys would probably not want to do that. But to be honest, I would rather feel that and fall here so I know what I can correct going into a World Championships.”

For guys like Modi, Moldauer and Whittenburg, the focus will be more about making an impact at home, especially as many veterans hang up their grips.

“The older guys left a pretty big mark on USA Gymnastics and they definitely left their legacy,” said Modi, an alternate for the 2016 Olympic team. “Now it’s up to all of us to pick that up. I think we’re all excited about it and this team has fostered a good competitive spirit, while still maintaining a very good friendship between everyone.”

Moldauer is becoming a force out of the powerhouse University of Oklahoma gymnastics program that was NCAA champion this year. Moldauer was the NCAA’s all-around silver medalist. He was also the 2017 AT&T American Cup Champion and 2017 Winter Cup all-around champion.

“Right now, I’m coming here just to perform my routines the best I can,” Moldauer said. “The end result will be the end result, but I try not to think about coming in here and winning. I’m just trying to come in and have fun. If I do what I do it will all play out.”

Whittenberg, who, like Modi, was an alternate to last year’s Olympic team, is the 2016 U.S. still rings champion, but admits to having a wider focus in Anaheim.

“My focus is as an all-arounder, but it wouldn’t be bad to focus on my special events,” said Whittenberg, who is working through some left patella tendonitis this week. “But for now, I definitely want to go out for the all-around. We’ll have to see how I feel and how my body holds up here.”

Also hoping to make a mark are accomplished junior national standouts like Matt Wenske and Shane Wiskus, who claimed the junior U.S. titles a year ago.

“I’m trying to make that step up as soon as I can. I’m just trying to improve myself, see if I can hit on all my events and see where that takes me,” Wiskus said. “This is the year to do it and there is definitely a gap open right now.”