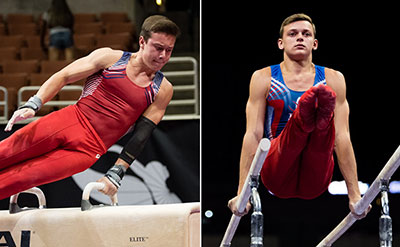 ANAHEIM, California – Once he was satisfied with his performance on pommel horse Thursday, Brody Malone’s confidence only grew after the opening day of the 17-18 junior men’s competition at the P&G Gymnastics Championships.

His day ended with his winning high bar score, but he still felt he could have been better, admitting its placement as his final event of the day could have played a role in not delivering in the discipline he would have hoped.

“I mean, maybe a little bit, but I’ve been competing these same sets all year so it’s basically perfecting those sets,” said Malone, who finished second on the day in the floor exercise and rings.

Taking the lead after day one in the 15-16 division was Lazarus Barnhill, a Houston native, who posted the top score in the floor exercise (13.450) and led the afternoon with an overall score of 78.500, just ahead of Garrett Braunton’s 78.050.

“I was most of all pleased with everything, but especially landings like on rings and horse,” Barnhill said. “Some things I wasn’t happy with where my rings handstand holds. I was a little shaky on that. But the overall day was definitely better than I thought it would be.”

Both junior divisions will be completed Saturday, in advance of the senior men’s competition at the national championships.