In debut elite season, Carey vaults into the spotlight 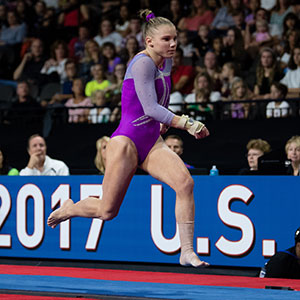 The former Junior Olympic gymnast is making waves in her first year at the elite level and has momentum that could take her all the way to the world stage. A year ago, Carey finished third in the all-around and tied for the vault title at the Junior Olympic National Championships. In early July, she competed in her first elite competition – the American Classic.

Vault is where Carey is making a name for herself, and where her name is now synonymous. At last year’s Junior Olympics, her vault – a tucked Kasamatsu full – was entered into the J.O. code of points, forever to be known as “The Carey.”

That vault, which she will perform in a layout position in Anaheim, will now be one of the must-see moments at this weekend’s national championships, and the Arizona resident knows that all eyes upon her comes with the territory when bringing something new to her sport.

“(The attention) is definitely a lot more than I’m used to, but I think it will be a lot of fun,” Carey said about performing in Anaheim this week.

Her coach on vault is none other than her father Brian Carey, who acknowledges the delicate task of helping his daughter push forward without going too fast.

“She’s always working ahead, and sometimes, I’ll hold things back a little longer, just to make sure she’s 100 percent ready,” Brian Carey said. “And when I tell her it’s ready, she trusts that it’s ready.”

That certainly was the case for the debut of “The Carey,” a vault Jade Carey first practiced some two years before it appeared in competition. Not only is Jade Carey the favorite to win the U.S. title on vault this weekend, she can also earn her way to the World Championships.

Yet for all the attention she is getting in vault, even admitting that it is her favorite apparatus, she continues to push to be a better overall gymnast.

“I’m just trying to make every single turn in the gym count and that has really helped me to improve on everything,” she said.

Competitions like the P&G Championships help Jade Carey see first-hand the high standard of the elite gymnastics level, but Carey knows she has the goods to help adjust that bar as she reaches the senior level.

Her father is taking it all in stride.

“I know she feels comfortable with the growing skills she has in the gym, but to be up here on the big stage, it’s nice to just get that experience and get more comfortable doing it,” Brian Carey said. “I am extremely proud of her that she has worked really hard. That’s all I can say about that. I’m just proud. It’s awesome.”