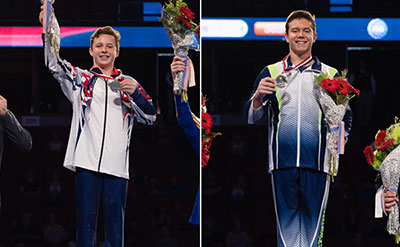 ANAHEIM, Calif. – Brody Malone is fairly sure he remembers the giant bear hug he received from coach Yuri Kouznetsov on Saturday at the moment his 12th and final event of the junior national championships was complete.

Those two thumbs up he flashed to an appreciative section of the Honda Center crowd, though, is all a blur.

The Georgia-native can be forgiven for not remembering everything in the whirlwind moments after he won the junior 17-18 division at the P&G Gymnastics Championships on Saturday. Saying his entire year was structured to have him peak this weekend, Malone’s national championship was a nod to perfect planning and execution.

“It feels good because I have been practicing pretty hard for at least the last three months,” Malone said. “I was doing everything I could prepare for the meet, as much as I could, and it worked out pretty well.”

It was a thumbs-up moment if there ever was one.

“Did I really do that?” Malone asked when somebody inquired about the skyward digits. “Ah, I don’t remember. It was probably for my coach.”

“I wanted to stick the (rings) landing so bad today and I stuck it,” said Braunton, who missed time earlier this year after suffering a stress fracture in his back at the end of 2016. “I just felt really good. My coach just said ‘Great job, that’s basically what we needed.’”

The Texas native’s 13.750 score on the rings was tops on the final day of competition and came during his fourth event of six. It was by no means, a clincher, though, as Braunton was being pushed by Paul Juda.

In the end, Braunton’s combined total of 157.250 was enough to outdistance Juda (156.750) and third-place finisher Riley Loos (145.500). Juda was the most decorated gymnast in the 15-16 division, earning three silver medals, including the one in all-around, and two bronze.

After staying locked in and determined for a full two days of competition, the excitement from his coaches Yuri and Andrei Kouznetsov, right when Malone’s floor exercise was complete, let him know it was time to celebrate.

“I was pretty pleased with floor,” Malone said. “I stuck my landings pretty good, but not as much on the second day as the first day. But I was pretty happy with floor. I just wanted to hit and focus on it being my last routine. I had to make it nice and clean.”