2016 Olympians, including Final Five, are among gymnasts recognized at 2017 P&G Gymnastics Championships 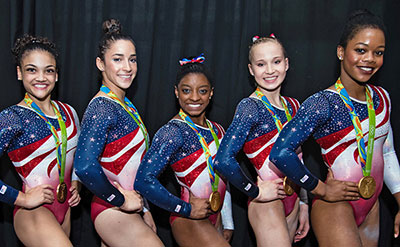 At the 2016 Olympic Games in Rio de Janeiro, Brazil, the United States garnered its greatest gymnastics medal haul since the 1984 Olympic Games in Los Angeles. The total tally of 12 medals – four gold, six silver and two bronze – is the most earned by the USA in gymnastics in a non-boycotted Olympic Games.

The Final Five made history at the Olympic Games in Rio de Janeiro by winning the USA’s second-straight Olympic team gold, a first for the United States and its third overall. The U.S. women posted the highest score on each of the four apparatus to secure the dominant victory, beating Russia by more than eight points. In total, the women brought home nine medals (four gold, four silver and one bronze), the most women’s gymnastics Olympic medals won by a single country since the Soviet Union claimed 10 medals at the 1972 Olympics.

The P&G Championships field will feature the country’s top gymnasts, and the championships also traditionally serves as part of the selection process for the World Championships.