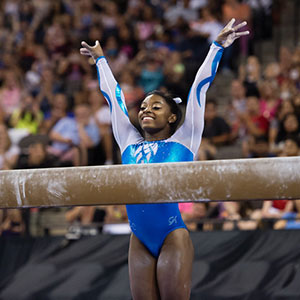 INDIANAPOLIS — She has won national and world all-around championships the last two years so it’s hard to imagine Simone Biles having a rough day in the gym.

But it happened Wednesday.

By her own estimate, Biles fell three, four or five times during her workout on balance beam during podium training for the P&G Gymnastics Championships at Bankers Life Fieldhouse. The women’s senior competition begins Thursday at 7 p.m.

A less experienced gymnast might understandably shrink away from addressing such mistakes publicly. That’s not Biles, 18.

“I cried it all out,” she said afterward, lightheartedly. “So I am good.”

Typically, she gets back on track by reminding herself that she has hit routines hundreds of times.

“Whenever we go out there … you’re like, ‘Can I do this? You kind of battle yourself. Usually I stand there for a second and I think of how many routines I have hit in the past and during the week. I’m like, ‘I can do this. I know it.’”

She would rather not be reminded of her all-around championship streak or that she is going for her third consecutive national title this week. Of course, someone mentioned it Wednesday.

Her reaction when she lets it sink in: “Oh my gosh, that’s crazy.”

A third consecutive national title would be one for the history books. No American woman has done that since Kim Zmeskal from 1990 to 1992.

Zmeskal, who coaches elite gymnasts at Texas Dreams Gymnastics and has junior- and senior-level gymnasts competing this week, recalled a mindset that helped her: “One thing at a time.”

“She obviously has the routines and the drive to make that happen,” Zmeskal, whose married name is Zmeskal-Burdette, said. “Sometimes it’s easier the first time around because nobody expects something. As an athlete I noticed that (after the first title) it started to feel different. … In this scenario, you just stay in your box. Don’t worry about other great things happening around you. Feed off that energy.”

Energy isn’t a problem for Biles, who is popular with her teammates for it. She is also known for staying composed in pressure-packed moments in a sport full of them. She can go from chatting with a teammate one second to executing a tough routine the next, 2012 Olympic gold medalist Aly Raisman said.

“She’s always smiling, always happy, so we all try to copy her,” Raisman, who is also competing this week, said.

Biles makes it look easy. Raisman joked that she often wonders what goes through Biles’ mind while practicing tough vaults. “I’m sure she’s thinking about what she wants to buy when she goes shopping.”

After the training session, Biles had just one thing on her mind: Another workout.

“I have to go in this afternoon,” she said, “and hit more sets on beam.”