Raisman’s in for the Long Haul 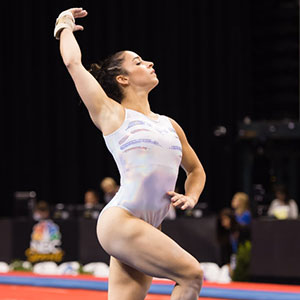 INDIANAPOLIS — When she told her coach she wanted to return to the national team a year after winning two gold medals and a bronze in the 2012 Olympics, Aly Raisman got an oh-no kind of response.

Mihai Brestyan, her longtime coach at Brestyan’s American Gymnastics in Massachusetts, told her he was enjoying life with a lot less worry.

“Mihai was like, ‘When I go to (the national) training camp and you’re not there, I can relax,’” Raisman said Wednesday after podium training for the P&G Championships at Bankers Life Fieldhouse. “’I don’t have to worry about anything. I can help the other girls. When you’re there, I can’t sleep at night. I get stressed out.’

“It’s a whole different thing when you have your own gymnast there.”

“Martha said she was excited to have me back, only if I was the same as before or better,” Raisman recalled.

Their message? She had to be serious.

In time Raisman won them over. She trained exhaustively from the start but at a deliberate pace to prevent injury.

She spent more than a year at Brestyan gym’s before attending a workout at the national training center near Houston. Elite gymnasts such as Raisman make swinging a giant on the uneven bars look easy, but she waited about seven months before attempting one.

“Some girls, when they take so much time off, they come back right away, they hurt their shoulders,” she said. “You don’t remember how much pounding you actually put on your body. Even doing a roundoff is a strain on your body.”

Raisman talks about the rigors of her sport with a sense of humor. Tough workouts every Monday and Tuesday leave her a little lost by Wednesday. “I don’t even remember what my name is, I’m so tired,” she said.

The first time she attempted an Arabian in her comeback, on a tumble track, she ended up falling flat on her face, Raisman said.

But her progress is nothing to laugh at.

Karolyi noted that Raisman’s start value in floor exercise will go up for 2016 as she adds connections. That was her marquee event at the London Games. She won gold to go with the team title and took bronze on the balance beam to become the most decorated American gymnast of the 2012 Games. She nearly won bronze in all-around but missed on a tiebreaker.

At the Secret U.S. Classic last month, Raisman finished second on balance beam and fifth in all-around and floor exercise.

The finish line is Rio in 2016. Her workouts are confidently geared for that race.