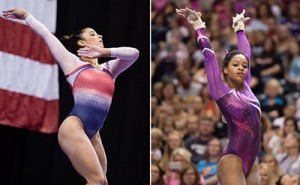 INDIANAPOLIS — Aly Raisman and Gabrielle Douglas are getting closer to regaining Olympic form.

Raisman and Douglas took breaks after leading the USA to team gold in the London Games three years ago. They have been cautiously adding skills to routines to avoid injuries.

In addition to winning a bronze medal here in all-around, Raisman won gold in floor exercise, her marquee event three years ago at the Olympics in which she won gold.

At the London Games she also took bronze on balance beam. She struggled on beam in Thursday’s preliminaries with a 13.75 but improved to 14.95 in the final.

“I wanted to prove I could come back strong,” Raisman said.

U.S. women’s national team coordinator Martha Karolyi and husband Bela offered Raisman encouragement before the meet. “It made me want to do really well,” Raisman said.

Douglas, the 2012 Olympic all-around champion, said she will increase the difficulty in all routines. “I have a plan,” she said.

Her highest score in the meet, 15.3, came on uneven bars in preliminaries. Her next highest was 15.15 on vault Saturday.

“I’m going to take this meet as a steppingstone,” Douglas said. “I’m happy with the overall performance.”