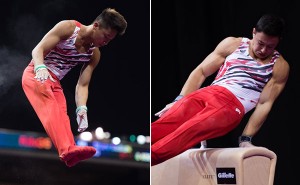 INDIANAPOLIS — Throughout most of Friday afternoon, Yul Moldauer stuck to his script and held off on including newer, bolder skills in his gymnastics routines.

One after another, scores of 14 or higher kept coming for him in the first round of the men’s 17-18 junior division of the P&G Championships. He has a notable lead over the field with 86.1 points in all-around. His teammate at the University of Oklahoma, Peter Daggett, is in second place going into Sunday’s final with 84.05. Kiwan Watts of North Chesterfield, Virginia, is in third with 83.8.

“This year I just wanted to get routines I could hit and try to clean them up as much as I can,” Moldauer, of Arvada, Colorado, said. “Sometimes if you throw bigger skills, it can be really stressful. You’re always focused on that one skill. You can actually downgrade your routine.”

In the final rotation, though, his parallel bars set was going so well that he added a half twist to his double-front dismount. “I felt really good so I stuck in the extra half,” he said.

“He doesn’t have any weaknesses as far as I can see,” Daggett said. “His strengths are everywhere. He can do some hard stuff. There will be a lot more to come from him and myself next year.”

Daggett expressed relief about his day. He hit all six events and turned in the best scores on still rings with a 14.4 and the horizontal bar with a 14.1.

“There’s nothing better,” he said of going 6-for-6. “You can’t ask for more from yourself.”

Daggett, 18, had a strong first day in last year’s P&G Championships but left the meet disappointed.

“I let myself get too high thinking I was all set to make the national team when it was really only halftime,” he said. “I’ve learned to pace myself.”

This weekend he has a different mindset. “I’m definitely not letting myself get too excited,” he said.

Daggett and Moldauer will be freshmen at Oklahoma this fall but have been on campus for several weeks for summer classes and workouts. Hanging out in the gym with USA national team members such as Steven Legendre and Jake Dalton already is serving them well, Daggett said.

Sitting in second place behind an Oklahoma teammate is a good place to be, he added.

“It’s awesome to be in the position I’m in now,” he said. “I’m in second place. My teammate is ahead of me. I couldn’t care less about the standings as long as we’re up there together.”