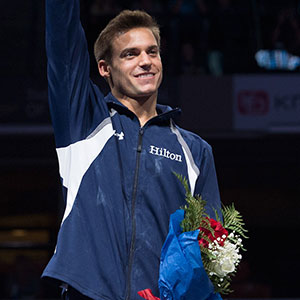 A Zen man he wasn’t after a fall from high bar Sunday in the men’s finals of the P&G Championships at Bankers Life Fieldhouse.

He looked calm but internally “I just raged,” he said.

“It’s the first time I competed angrily,” he said of his disposition for his next event, floor exercise. “It really helped.”

He scored 15.8 on floor, his highest score of the day en route to his third consecutive national all-around championship. That puts him in elite company. Paul Hamm, who won the Olympic all-around title in 2004, was the last American man to win three in a row from 2002 to 2004.

“It’s fantastic,” Mikulak said. “I still didn’t live up to my own expectations of how I wanted to perform. But coming out on top is always a good feeling.”

He was going for zero falls but had to settle for two across all 12 routines.

Mikulak and Whittenburg were immediately named to the world-championship team that will compete in Scotland this fall. The remainder of the team is expected to be picked by Monday afternoon.

Training in recent months with Whittenburg, Brooks and others in Colorado Springs already has made a difference in Mikulak’s upper body strength. Whittenburg described a rigorous circuit workout for rings in which seven skills are each held for three seconds, sometimes with weights.

It paid off for Mikulak, who scored 15.5 on still rings, a personal best in an event that requires tremendous power.

But no one could match Whittenburg’s strength on rings. He took home gold by scoring 16.1. to go with the 15.9 he scored on day one.

Asked about the possibility of competing for a world medal on rings, Whittenburg said he would need to upgrade the difficulty of the routine. He is thinking about it.

“I feel as though I’m a contender,” he said, “but … I’ll worry about the team and all-around for the most part.”

In all, Whittenburg took home four medals. He was second in floor exercise and third in vault.

Mikulak edged him with five medals. The 2012 Olympian won vault and parallel bars and took third on pommel horse and high bar.

Brooks hopes his third-place finish improves his chances of making the world team.

“I made a good bid for myself on p-bars and high bar,” he said, adding that he would be a strong backup on still rings and vault.

On a day when most of the top gymnasts fell from high bar, Brooks had no such trouble and scored 15.75 for the individual championship. “I was like, ‘Just stay on the bar,’” he said with a laugh.

He also earned a score of 15.75 on parallel bars for a silver medal.