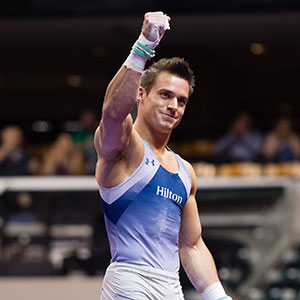 He scored 15.1 or better on all three, which for him is pretty standard.

Mikulak got to parallel bars and hit something special. He displayed unrivaled fluidity and precision to score 16.25 and took a formidable lead in all-around in the P&G Championships at Bankers Life Fieldhouse.

“I’m not just doing the skills,” he said in describing his goal to impress international judges. “I’m showing off the skills to you. You want to make it look easy.

“That’s what gymnastics is all about.”

He pulled that off beautifully.

“If I were to do that routine at the Olympics or the world championships, I’d be very happy,” he said.

He is on the verge of winning his third consecutive national championship in all-around. The last American gymnast to do that was Paul Hamm from 2002 to 2004.

Mikulak will take 92 points in all-around into Sunday’s final round, ahead of Donnell Whittenburg with 89.65 and Paul Ruggeri III with 88.35. Two-time Olympian Jonathan Horton is vying for a medal, and a berth on the team that will advance to the world championships this fall, with 88.35 points for fourth place.

“He definitely did awesome,” Whittenburg said of Mikulak.

“It’s amazing,” Ruggeri said of Mikulak’s lead. “He’s an incredible athlete. He does not have a weakness.”

The only event that gave Mikulak trouble was floor exercise. He stumbled on a tumbling pass in a newer routine for a score of 14.35. He is in first place on parallel bars as well as vault with a 15.5.

Whittenburg turned in the highest score on still rings with a 15.9 but said he was most excited about getting through his high bar set. A release move had given him trouble in practices. “I found a way to get through it so it was great.”

Whittenburg is trying to position himself for another trip to the world championships. He is building a strong case.

To no one’s surprise, Mikulak looks like the sure thing.