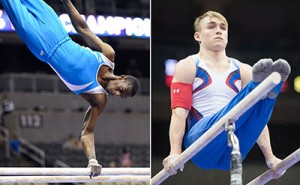 INDIANAPOLIS — Gymnasts sometimes tell funny stories about how they got started in the sport. Many times it is propelled by acrobatic mischief at a young age that leads parents to sign up their kids in a hurry for gymnastics or tumbling.

For Kiwan Watts, it involved broken furniture. By the time he was 3 he had broken two beds while imitating WWE wrestlers and off he went to gymnastics class to burn through his habit of jumping on the bed.

Tristan Burke, on the other hand, didn’t break anything but cost his parents a lot nonetheless.

All it took to get him hooked on gymnastics was a trip to a gym with his day-care class. He was 7. Burke remembers a friend teaching him how to do a backflip.

“From there it was uphill for me and downhill for my parents, for their wallets and nerves,” he said.

Watts and Burke are two junior-level men’s gymnasts to watch this weekend at the P&G Championships at Bankers Life Fieldhouse. Starting next year, they will begin competing with the seniors.

Both already have junior age-group national all-around titles to their names.

Watts, who turned 19 Wednesday, gained momentum this summer by winning medals in every event at the Junior Olympic National Championships. He was victorious on pommel horse and the horizontal bar and finished second in all other events, including all-around. He doesn’t have a weak event, men’s national team coordinator Kevin Mazeika said.

Watts has been with the national team only about two years. He attends J. Sargeant Reynolds Community College in Richmond, Virginia, and hopes to transfer and compete for Penn State next year.

“Once he made the (national) team, he really took off,” Mazeika said. “His improvement was pretty phenomenal.”

Burke, 18, has been on the national team since he was 13 and trains at WOGA, a Texas gym known for churning out women’s Olympic champions Nastia Liukin in 2008 and Carly Patterson in 2004. Next year he will head to Ohio State.

Both gymnasts will be hard-pressed to make the Olympic team next year. Typically, men make that squad in the 20s when their bodies are stronger.

“I’m not thinking about the Olympic team,” Watts said. “If you get ahead of yourself, you get cocky. If you get cocky, you start messing up. I’m pretty good by being humble.”

Asked if Rio is on his mind, Burke said: “Of course. It was always the goal growing up. My goal is now a little bit toward 2020. It’s a whole lot more realistic.”

Then Burke remembers that Paul and Morgan Hamm made their first Olympic team as teenagers. And Sam Mikulak was months shy of his 20th birthday when he competed in the 2012 London Games.

“I’ve totally got to do it,” Burke said.