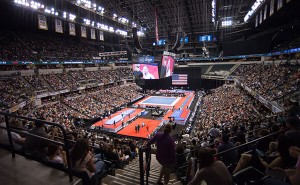 INDIANAPOLIS, Aug. 17, 2015 — The combination of attendance, community outreach, local corporate support, fan activities, a great venue and athletic excellence made this year’s P&G Championships the most successful since USA Gymnastics introduced the current national championship format in 2005. More than 33,000 people attended the P&G Gymnastics Championships that concluded Sunday at Bankers Life Fieldhouse, a 35 percent increase from when Indianapolis hosted the event in 2005.

“USA Gymnastics is proud to call Indianapolis home, and the city knocked it out of the park with its staging of the 2015 P&G Championships,” said Steve Penny, president of USA Gymnastics. “Our athletes came ready to compete, and Bankers Life was the perfect setting for their amazing feats. This year’s championships is the ‘best ever’ in so many ways, from overall attendance to local corporate support to fan engagement. Thank you to Indianapolis, the Indiana Sports Corp, Mayor Greg Ballard and the local business community for providing a spectacular week.”

Attendance totaled 33,457, including 15,370 fans in the stands for the combined sessions of junior and senior women’s competition on Saturday. Two-time world champion Simone Biles won her third straight national title on Saturday night during the NBC-televised event. The last time the Indiana Sports Corp and its community partners hosted the championships in Indianapolis was in 2005. Total attendance then was 24,757, so this year’s four-day event posted a 35 percent increase. At the 2014 championships in Pittsburgh, total attendance was 28,703.

“USA Gymnastics, Bankers Life Fieldhouse and all of our sponsors have been great partners. It showed in the arena, on Georgia Street and throughout downtown with a complete gymnastics takeover. As usual, our volunteers were fantastic and the support of fans and the community was second to none,” said Ryan Vaughn, president of the Indiana Sports Corp. “Ten years is too long between championships, and we’ll be working with USA Gymnastics to bring future gymnastics events to Indianapolis.”

Before the evening sessions on Thursday, Friday and Saturday, fans enjoyed Brazil-themed family activities on Georgia Street and celebrated the role Indianapolis played in the Countdown to Rio. The street came to life with a gymnastics-themed sand sculpture, fan-participation painting that was presented to USA Gymnastics, chalk art, salsa dancing and other activities.

Youth programs associated with the championships, including behind the scenes tours, gymnastics banner creation and fitness activities reached more than 4,000 local kids.