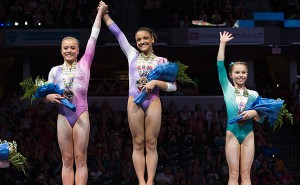 INDIANAPOLIS — Just before Lauren Hernandez gripped the uneven bars in Saturday’s final round of the junior women’s P&G Gymnastics Championships, she fought a surge of nerves by chatting with her coach.

They talked about the dark blue fingernail polish on the nails of a judge for that event.

Usually they talk about shoes the judges are wearing and try to figure out brand names or designers as a distraction for Hernandez’s jitters.

It was just enough to calm Hernandez for an uneven bars routine that emphasized her long lines and sleek release moves and scored 15.2 at Bankers Life Fieldhouse.

That score helped Hernandez secure the all-around championship and gave her the national title on bars. She scored 59.55 points in all-around and finished with a two-day total of 117.5.

“I saw the score and said, ‘Wow,’” Hernandez said of nearing 60 points for one round, a mark more commonly seen at the senior level.

She will move up to the senior level in 2016, along with MG Elite club teammate Jazmyn Foberg, the all-around runner-up, and Ragan Smith, who finished third thanks in part to a difficult balance-beam routine that received a 15.2, a score that could contend for a medal at the senior level.

Smith, who trains at Texas Dreams under 1992 Olympian Kim Zmeskal-Burdette, said her coach had her hold back a tougher dismount, a double Arabian called the Patterson in honor of 2004 Olympic champion Carly Patterson of the U.S.

“I could have done the Arabian but I didn’t need to,” Smith said.

In addition to earning a junior national title on beam, Smith won floor exercise, her favorite in which to compete. “I like to play with the crowd,” she said. “I like to express myself.” Upgrades on floor are in the works, she said.

Hernandez, too, said upgrades are coming for some routines. After missing much of last year because of injuries, “getting first is just a great accomplishment,” she said.

Earlier in the week she talked about being thrilled to score her first 15 ever at the Secret Classic last month. She picked up two more 15s Saturday, on the uneven bars and in vault with a 15.1. She tied for third on vault with Emily Gaskins of Palm Beach Gymnastics.

“I hope one day it gets old,” Hernandez said of scoring 15s.

Her club teammate, Foberg, scored 15.2 on vault, and that helped her win silver in the event. Jordan Chiles of Naydenov Gymnastics won vault after scoring 15.5 in the final.

“I feel really great about my day,” Foberg said.

As for competing at the senior level soon, “today proved I could do it,” Foberg said.

Foberg and Hernandez were in first and second place, respectively, after Thursday’s first round. Their coach, Maggie Haney, said then that her gymnasts were capable of cleaner, stronger routines.

“I am very satisfied today,” Haney said Saturday. “This is what they’re capable of doing.”