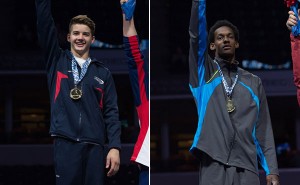 INDIANAPOLIS — Davis Grooms had it all figured out. He needed a 13.4 in floor exercise, his final event, to win the all-around title Sunday in the 15-16 junior men’s division of the P&G Gymnastics Championships at Bankers Life Fieldhouse.

“I was watching, for sure,” Grooms said of keeping his eye on the scoreboard. “I don’t know if I’m supposed to, but I knew what I needed.”

Wiskus, of Spring Park, Minnesota, also had been watching the scoreboard. “I was calculating it all out,” Wiskus said. “I was watching Davis, cheering him on. I love Davis to death. I was happy for him.

“I had a bad first day so just to come back and end up where I did was amazing. I’m really happy with my performance.”

The improvement in the second round helped Wiskus take gold over Grooms in still rings, silver in floor exercise and bronze in parallel bars.

Grooms won a second gold medal, on high bar, with a second-day score of 13.7.

In the 17-18 division, Kiwan Watts of North Chesterfield, Virginia, repeated as all-around champion with 166.95 points to 166.65 for University of Nebraska freshman-to-be Jordan King.

“I thought it was pretty rough,” Watts said of his performance. “I fell on floor and pommel was a little shaky. My mind was like, ‘OK, let’s get this going.’

“On rings I pulled it out there, and the rest of the meet was pretty good.”

Despite a form break on pommel horse, Watts showed dramatic improvement from prelims and tied for a gold medal with King. His second-day score of 14.65 on rings won him another gold. He took home silver on high bar.

Some of the top juniors from Friday’s preliminaries moved up to the senior competition Sunday. Therefore, they were ineligible for junior standings and awards.

Yul Moldauer, who had led the 17-18 juniors in all-around in prelims, improved in almost every event with the seniors. His highest score, 15.1, came on parallel bars. Moldauer’s teammate at the University of Oklahoma, Peter Daggett, scored a high of 14.75 on still rings.