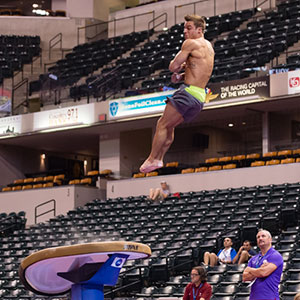 INDIANAPOLIS —Olympian. NCAA champion. Entrepreneur. Sam Mikulak is all of those things.

By Sunday at the P&G Championships at Bankers Life Fieldhouse he could be something more: Three-time U.S. men’s all-around champion. The men’s senior competition begins Friday at 7 p.m.

“He’s a pretty cool guy,” Mikulak said. “That’s one of the greatest you can be compared to.”

“I would definitely say a solid worlds performance is what I want,” he said.

Mikulak and Hamm, who is coaching at Premier Gymnastics Academy in Illinois, talk often. Recalling his blueprint for international success, Hamm said, “You have to calculate the amount of risk you’re willing to take any time you design a routine and analyze whether you’re hitting those routines and decide from there.”

Mikulak is in the process of doing that, tweaking and upgrading routines a year out from the Rio Olympics. The changes came together for him earlier this summer at the Pan American Games as he led the USA to a team title and picked up all-around gold as well as bronze in floor exercise and parallel bars.

It helped that about three months ago Mikulak uprooted from Michigan to devote himself to two-a-day workouts with other national team members at the U.S.O.C. training center in Colorado Springs.

“When you have that many good athletes training together, you’re looking over your shoulder all the time,” Mazeika said. “It pushes you. It motivates you. Sam is feeling the full effect of that.”

In his little bit of spare time, Mikulak is marketing a naturally caffeinated energy tea drink for a company he founded with friends, MatéBros. They raised more than $40,000 on Kickstarter to get it going. “We’re working on going international,” he said. “Gymnasts in the U.K. are marketing it for us.”

You could say he is living a high-energy life, between a business that is taking off and his high-flying routines, but he counters it with meditation, which he added to his daily routine last year.

“It’s really hard,” Mikulak said. “That’s why I like it. I like progressing in something that seems impossible to be perfect at.”