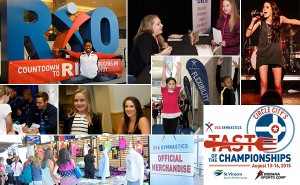 INDIANAPOLIS, August 6, 2015 – When gymnastics fans and officials arrive in downtown Indianapolis to watch the USA’s and many of the world’s best gymnasts compete for national honors at the P&G Gymnastics Championships Aug. 13-16, they’ll also be treated to special events and activities in Bankers Life Fieldhouse and on adjacent Georgia Street.

For four days, Georgia Street will be transformed into a Brazilian beach party featuring “Countdown to Rio” activities in recognition of the 2016 Olympic Games in Rio de Janeiro, Brazil, that are less than one year away. Indianapolis Mayor Greg Ballard and athletes and officials from USA Gymnastics will kick off the four-day P&G Championships Thursday, Aug. 13, at 11 a.m. before the first afternoon of junior women’s competition.

The kickoff will feature world famous gymnastics coach Bela Karolyi and Hoosier Olympic gymnastics medalists who will be honored later that day at “Back Home in Indiana” night. 1996 Olympic team champion Jaycie Phelps, and 2008 Olympic team silver-medalists Samantha Peszek and Bridget Sloan will be recognized during pre-competition festivities, which also feature the Indianapolis Children’s Choir.

Throughout the four days, fans can pose for photos with the Rio 3-D sculpture, which will alternate locations between Georgia Street and Bankers Life Fieldhouse.

For the Countdown to Rio beach party, the east block of Georgia Street will become home to a 1,600-square-foot beach, where a sand sculptor from the Indiana Ice Studio will transform five tons of sand into gymnastics-themed sand art, beginning Thursday, Aug. 13.

Well-known gymnastics celebrities, including 1996 Olympic gold medalist Shannon Miller, 2004 Olympic all-around champion Carly Patterson, Peszek and Sloan, will be on hand to sign autographs on Georgia Street and at Bankers Life Fieldhouse throughout the four days of competition.

To add to the festive, nighttime atmosphere downtown, the Indianapolis Power and Light building, located on the Circle, will feature a U.S. flag and the Olympic rings for the four nights of the P&G Championships.

Before the senior women’s finals on Saturday night (Aug. 15), Angie Miller, a 2013 American Idol finalist, will perform outside Bankers Life Fieldhouse at 6:15 p.m. She finished third on the hit television show and released her first EP, ‘Weathered’ last year which debuted at number one on Billboard’s heatseekers chart. As fans leave the competition later that evening, they’ll be greeted by Brazilian music played by a DJ and a light display. The first 4,000 fans leaving the Fieldhouse will receive Olympic-themed glow sticks for the post-event entertainment.

The fan activities for Georgia Street and inside Bankers Life Fieldhouse are outlined below. Shannon Miller, Patterson, Peszek and Sloan are among the well-known gymnasts who will sign autographs on Georgia Street and the Bankers Life Fieldhouse concourse throughout the four days. Organizers estimate that approximately 300 individuals will have the opportunity for an autograph during the allotted time. For a schedule of when and where athletes are signing autographs, the list of participating food trucks, and more information on the P&G Championships and fan activities, go to PGChamps.com.

If there is inclement weather, the Georgia Street activities will be cancelled. Fans should check PGChamps.com for updates and the latest schedule.

In addition to competition, nearly 3,000 people are expected for the USA Gymnastics National Congress and Trade Show, an annual education event for the entire gymnastics community held in conjunction with the championships. The National Congress will be housed at the Indianapolis Convention Center and will feature presentations, demonstrations and educational seminars.

P&G Championships information
Scheduled for Aug. 13-16, the four-day P&G Gymnastics Championships serves as USA Gymnastics’ national championships and will determine members of the men’s and women’s national team and part of the World Team selection.

Tickets may be purchased at Ticketmaster through www.ticketmaster.com, Ticketmaster charge by phone 1-800-745-3000 or at participating Walmart locations in Central Indiana and Bankers Life Fieldhouse Box Office. Prices vary depending on seat location, and listed ticket prices do not include applicable fees.

For more information on the 2015 P&G Gymnastics Championships, go to pgchamps.com.

Biles and Sam Mikulak of Newport Coast, Calif./Team Hilton (U.S. Olympic Training Center), both won their second consecutive women’s and men’s U.S. all-around titles, respectively, at the 2014 P&G Championships. The roster of former U.S. all-around champions is a veritable who’s who of gymnastics, including: women – Nastia Liukin, Shawn Johnson, Carly Patterson, Courtney Kupets, Shannon Miller, Dominique Dawes, Kim Zmeskal and Mary Lou Retton; and men – Paul Hamm, Blaine Wilson, John Roethlisberger, Mitch Gaylord, Peter Vidmar and Bart Conner. The U.S. Gymnastics Championships traces its history back to 1897 for the men and 1931 for the women. Previously known as the Visa Championships, this is the fourth time the prestigious event has been held in Indianapolis (1986, 1998, 2005, 2015).