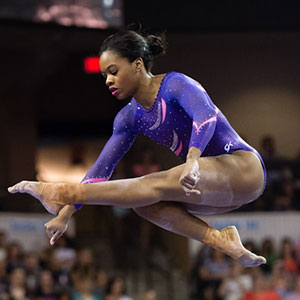 INDIANAPOLIS — Comebacks are common in sports, and they are certainly common in gymnastics, but successful returns can be hard to come by.

The U.S. has a deep roster of Olympic-caliber gymnasts. With only five gymnasts making an Olympic team, it is tough for those who leave the sport to find firm footing when they return.

Gabrielle Douglas, the 2012 Olympic all-around champion, likes her chances. She took about 2-1/2 years off from competing after the London Games, where she and other members of the Fierce Five won the team gold.

“I’m glad that I took time off,” she said Wednesday after podium training for the P&G Gymnastics Championships at Bankers Life Fieldhouse. “My body really needed it. I missed gymnastics. It felt really natural for me to come back.”

Her comeback will continue Thursday night in the first round of the women’s senior competition.

Last month at the Secret Classic, her first U.S. meet since returning, Douglas finished second in all-around, about two points behind Simone Biles. That point margin is significant in gymnastics but Douglas nonetheless impressed. She and fellow Fierce Fiver Aly Raisman, who also has returned after a break, have about 11 months to gain ground.

Douglas, 19, is silencing anyone who questioned whether her body could still take the demands of her sport.

“That’s still young,” she said of her age. “I still feel young and fresh. My body is holding up really well.”

Her mom told Douglas to avoid reading comments on the Internet, where for better and worse everyone can be a critic.

But Douglas checked out Twitter and Facebook before the Secret meet and saw that some didn’t think she had another Olympic run in her. That prompted her to say in an interview after the meet, “My comeback wasn’t fake, guys.”

“I think when they’ve seen other gymnasts try to come back, it wasn’t that successful,” she said Wednesday.

It would be a mistake to count her out.