‘Countdown to Rio’ begins in Indy with start of P&G Gymnastics Championships on Aug. 13 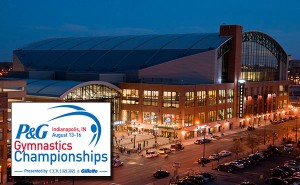 INDIANAPOLIS, August 12, 2015 – With the start of the 2015 P&G Gymnastics Championships on Thursday, the “Countdown to Rio” begins in earnest for the USA’s top male and female gymnasts when they begin their quest for this year’s national titles and national team berths. Competition gets underway on Aug. 13 with the junior women at 1 p.m. and the senior women at 7 p.m. at Bankers Life Fieldhouse. The 2016 Olympic Games in Rio de Janeiro, Brazil, are less than a year away, but fans and spectators alike can get into the Rio spirit by visiting the Brazilian beach party on Georgia Street and other special activities on the Fieldhouse’s concourse that also come to life on Thursday.

For the men, Sam Mikulak of Newport Coast, Calif./Team Hilton (U.S. Olympic Training Center), is seeking his third consecutive U.S. all-around title when the men take the floor on Aug. 14. Mikulak is one of nine men competing who have combined for a total of three Olympic and nine World medals. 2014 Youth Olympic all-around bronze-medalist Alec Yoder of Zionsville, Ind./InterActive Academy, Mitchell Brown of Fortville, Ind./DeVeau’s, and Anton Stephenson of Fishers, Ind./University of Nebraska, are the three local male gymnasts expected to compete.

For the Countdown to Rio beach party, the east block of Georgia Street will become home to a 1,600-square-foot beach, where a sand sculptor from the Indiana Ice Studio will transform five tons of sand into gymnastics-themed sand art, beginning Thursday, Aug. 13. Well-known gymnastics celebrities, including 1996 Olympic gold medalist Shannon Miller, 2004 Olympic all-around champion Carly Patterson, Peszek and Sloan, will be on hand to sign autographs on Georgia Street and at Bankers Life Fieldhouse throughout the four days of competition, where the Rio 3-D sculpture will make fun photo memories.

Women’s gymnastics
Eight gymnasts collectively have won 21 World and Olympic medals since 2010, including athletes who helped Team USA win the World team titles in 2011 and 2014 and the team gold medal at the 2012 Olympic Games.

The five-members of the women’s team that won the team gold at the recent Pan American Games in Toronto, Ont., Canada, are also expected to compete: Madison Desch of Lenexa, Kan./GAGE; Rachel Gowey of Urbandale, Iowa/Chow’s Gymnastics; Amelia Hundley of Fairfield, Ohio/Cincinnati Gymnastics; Emily Schild of Huntersville, N.C./Everest Gymnastics; and Megan Skaggs of Marietta, Ga./Gymnastics Academy of Atlanta. Gowey won the uneven bars title. Desch went on to win the all-around silver medal, and Skaggs was the silver medalist for the balance beam. Hundley won two individual event medals: the silver for the floor exercise and the bronze for the uneven bars.

In addition, 2013 junior U.S. all-around champion Bailie Key of Montgomery, Texas/Texas Dreams, is expected to make her senior debut at the P&G Championships. Maggie Nichols of Little Canada, Minn./Twin City Twisters, who finished third at the recent Secret U.S. Classic, has also registered for the event.

The junior women’s field includes MG Elite’s Lauren Hernandez and Jazmyn Foberg, both of Morganville, N.J. Foberg is the reigning U.S. junior champion, while Hernandez claimed the top spot in the junior competition at the Secret U.S. Classic.

Men’s gymnastics
The men’s field includes nine men who have combined for a total of three Olympic, nine World and 36 U.S. titles are listed below.

Yoder will be competing in the senior division, with Brown and Stephenson in the junior elite 15-16 and 17-18 divisions, respectively.

Fan activities
Lots of fun fan activities are planned for Georgia Street and the Bankers Life Fieldhouse concourse. Miller, Patterson, Peszek and Sloan are among the well-known gymnasts who will sign autographs on Georgia Street and the Bankers Life Fieldhouse concourse throughout the four days. Organizers estimate that approximately 300 individuals will have the opportunity for an autograph during the allotted time. If there is inclement weather, the Georgia Street activities will be cancelled. For a schedule of when and where athletes are signing autographs, the list of participating food trucks, weather updates, and other information on the P&G Championships and fan activities, go to PGChamps.com.

In addition to competition, nearly 3,000 people are expected for the USA Gymnastics National Congress and Trade Show, an annual education event for the entire gymnastics community held in conjunction with the championships. The National Congress will be housed at the Indianapolis Convention Center and will feature presentations, demonstrations and educational seminars.

Scheduled for Aug. 13-16, the four-day P&G Gymnastics Championships serves as USA Gymnastics’ national championships and will determine members of the men’s and women’s national team and part of the World Team selection.

Tickets may be purchased at Ticketmaster through www.ticketmaster.com, Ticketmaster charge by phone 1-800-745-3000 or at participating Walmart locations in Central Indiana and Bankers Life Fieldhouse Box Office. Prices vary depending on seat location, and listed ticket prices do not include applicable fees.

For more information on the 2015 P&G Gymnastics Championships, go to pgchamps.com.

The roster of former U.S. all-around champions is a veritable who’s who of gymnastics, including: women – Nastia Liukin, Shawn Johnson, Carly Patterson, Courtney Kupets, Shannon Miller, Dominique Dawes, Kim Zmeskal and Mary Lou Retton; and men – Paul Hamm, Blaine Wilson, John Roethlisberger, Mitch Gaylord, Peter Vidmar and Bart Conner. The U.S. Gymnastics Championships traces its history back to 1897 for the men and 1931 for the women. Previously known as the Visa Championships, this is the fourth time the prestigious event has been held in Indianapolis (1986, 1998, 2005, 2015).