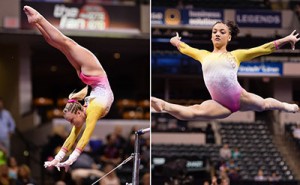 INDIANAPOLIS — Coach Maggie Haney had two junior-level gymnasts atop the leaderboard Thursday in the first round of the P&G Gymnastics Championships, but she was far from satisfied.

“They both did not do their best gymnastics,” Haney said of Jazmyn Foberg, in first place in all-around going into Saturday’s final with 58.35 points, and Lauren Hernandez, in second place with 57.95 at Bankers Life Fieldhouse.

On the bright side, the pair from MG Elite in New Jersey led the competition despite not being at their best. “That’s a really good thing,” Haney said.

On the flip side, “they’re both capable of much better landings, control and being more solid on beam, for sure,” Haney added.

“My vault, I could have a better landing,” Foberg, 15, said. Yet, it was still impressive among the junior gymnasts. She scored the only 15 of the day, her first ever.

“Bars wasn’t too bad but I could stick my dismount,” Foberg continued. “Beam wasn’t my best. On floor, I went out of bounds. I know I can control that better.”

Hernandez neared a 15 on uneven bars with a 14.9 even though she held back some difficulty. Inching close to her in all-around was Ragan Smith of Texas Dreams, who scored 57.4 and turned in the day’s best scores on balance beam and floor exercise.

“I want to see improvement on vault with a more controlled landing,” Hernandez said. “For floor, I need to extend more of my leaps. On bars, I missed some of my connections but it was better to be safe than sorry. On beam, I was shaky on one skill but overall it was fine.”

Foberg and Hernandez are just months away from moving up to the senior level to compete for spots on the 2016 Olympic team, where standards are monumentally higher.

“I do have goals on Rio,” Foberg said, adding that she doesn’t want to think too far ahead. She will go for her second consecutive national junior all-around championship Saturday.

With Olympic goals in mind, women’s national team coordinator Martha Karolyi is paying close attention to Foberg and Hernandez. That’s not lost on the gymnasts or their coach.

“It’s the end of the year,” Haney said. “The details should be there. I think they let nerves get to them a little bit.

“It wasn’t a disaster by any means, but they’re capable of being more precise.”