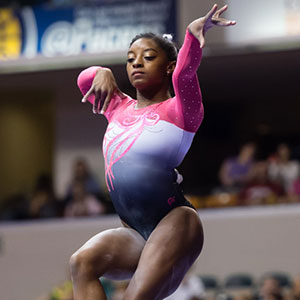 INDIANAPOLIS — An uncharacteristic fall on a tumbling-pass in floor exercise could have derailed Simone Biles. There was also trouble on the balance beam.

But she wiped those away with a rocketing Amanar vault that put her in first place of the P&G Gymnastics Championships on Thursday at Bankers Life Fieldhouse. Biles will try for a third consecutive national all-around title in Saturday night’s final round.

“It means you can’t give up whenever you know you’re a little bit off,” Biles said after finishing the first round with 61.1 points in all around to overtake rising star Maggie Nichols (59.7) and Gabrielle Douglas (58.7).

Biles had trailed most of the night. Heading into the final rotation she and Douglas were behind Nichols in the standings.

She had made a costly mistake in a dynamic floor-exercise routine. With not quite enough power on her last tumbling pass, Biles fell short on the landing. She scored 14.9, low for her.

“I was disappointed in myself in floor,” Biles said. “That’s really unusual for me. It was weird for me.”

Her coaches told her to channel the frustration into a more powerful vault. “I was like, ‘OK, just put more energy into the vault,’” she said.

The vault was a thing of beauty that scored 16.25, far and away the top score of the night. It was punctuated by a stuck landing.

“It just shows how amazing she is,” Nichols said.

Biles joked about showing her human side with the fall on floor: “Everyone thinks I’m a robot.”

Even her rough patches weren’t really that bad. Her floor score was second highest of the night in that event. She also produced the second-highest mark, a 14.8, on balance beam despite a few flaws.

On beam she had to fight through shakiness. Biles said she thought a lot about advice from her coach, who told her not to dwell on any wobbles on the balance beam, to shake them off quickly so an error wouldn’t carry on to the next skill.

“Yes, I stayed on the beam, but it’s nothing I would want it to be,” she said.

Just a short time later, she got her act together for the lead.