A Three-Peat for Biles 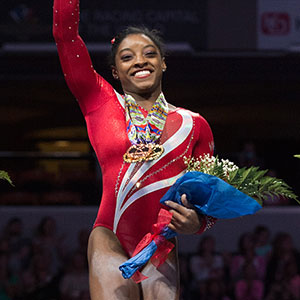 Dominant. That’s another way to describe her performance Saturday at the P&G Gymnastics Championships at Bankers Life Fieldhouse. Biles scored a two-day total of 124.1 points in all-around for the national championship in front of 15,370 fans.

Biles became the first American woman to three-peat since Kim Zmeskal won three national all-around titles in a row from 1990 to 1992.

“It led her to the Olympics so it feels pretty good knowing I’ve achieved what she’s achieved,” Biles said. “I keep shocking myself every year.”

She is also a two-time world champion in all-around, a title she hopes to defend this fall in Scotland.

“Her skill level is higher than anyone else’s in the world,” U.S. women’s national team coordinator Martha Karolyi said. “She really doesn’t have a weak event.”

Biles started the night on balance beam and put behind her struggles she had in Thursday’s preliminaries. A score of 15.9 secured an individual gold medal on beam.

“Beam is always a little bit stressful to start on,” she said. “I was glad I could redeem myself.”

Once she hit her dismount, all the stress was gone, she said.

Vault was far and away the best event for Biles. The Amanar she performed scored 16.3, which included a 9.9 out of a possible 10 points for execution, a mark rarely seen in the newer scoring system.

“That’s just crazy,” Raisman said of Biles’ execution score. “I always watch her because she is so explosive. There really are no words to describe her. She doesn’t let the pressure get to her.”

Biles was one of two Americans who performed two vaults. She took home gold, and MyKayla Skinner won silver.

The nervousness that held back Biles a bit in preliminaries was long gone.

“Overall, she came in with a different attitude,” Biles’ coach at World Champions Centre, Aimee Boorman, said. “It was going to be a good day.”

In last year’s world meet, Biles won all-around, balance beam and floor exercise in addition to the leading the USA to a team gold. But she said this four-event performance was even stronger.

“Hopefully,” she said, “it will get better.”