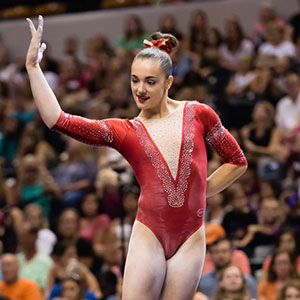 INDIANAPOLIS — The USA is known around the world for its depth and power in women’s gymnastics.

Among its stars is Simone Biles, a two-time world champion in all-around who Saturday won her third national title in a row at the P&G Championships at Bankers Life Fieldhouse.

Gabrielle Douglas, Aly Raisman and Kyla Ross also have star power as returning Olympians who hope to make it to the Rio Games in 2016.

Here’s another name to know: Maggie Nichols. The 17-year-old from Minnesota finished second in all-around behind Biles and is in the running to make the world-championship team that will travel to Scotland in October.

“I wanted to be sharper on everything,” said Nichols, who had flu-like symptoms Saturday morning. “I honestly wasn’t feeling the best today when I woke up. So I’m really happy that I pulled through and made all my events.”

Nichols believes she made a good case to be selected for the world team, though gymnasts will have to prove their readiness again at a selection camp.

“I think I showed the committee that I am consistent and that my routines are getting better and cleaner,” she said. “I still have some things to prove to them, but I think I made a good impression.”

Earlier in the week, when asked about up-and-coming gymnasts at the senior level, U.S. women’s national team coordinator Martha Karolyi brought up Nichols as the most improved for this Olympic cycle.

That was good news to Nichols.

“It’s a huge honor because I look up to her and want to impress her,” she said. “And I just want to show her that I’ve been working hard in the gym.”