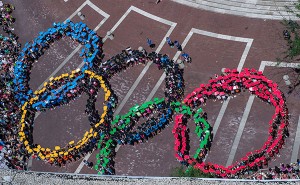 INDIANAPOLIS, June 23, 2015 – As part of the 2015 Olympic Day celebration in Indianapolis, USA Gymnastics and Indiana Sports Corp recognized the 11 companies that have become local partners for the 2015 P&G Gymnastics Championships, scheduled for Aug. 13-16 at Bankers Life Fieldhouse in Indianapolis, and shared plans for fan activities on Georgia Street and Circle City’s Taste of the Championships during competition week. USA Gymnastics also announced that Indy’s three Olympic gymnastics medalists Jaycie Phelps, team champion in 1996, and Samantha Peszek and Bridget Sloan, both team silver medalists in 2008, will be honored on Aug. 13, the first night of competition for women’s gymnastics.

“Having our national championships in our hometown is special for us,” said Steve Penny, president of USA Gymnastics. “We have 11 Hoosier companies, led by St.Vincent Sports Performance, whose support is integral to the success of this year’s championships. And Aug. 13 is going to be a special night when we honor Jaycie, Bridget and Sam in their hometown and recognize their Olympic accomplishments. Everyone, whether they are attending the championships or not, are welcome to enjoy the festivities on Georgia Street that will include family-based activities and bring a taste of Rio de Janeiro, the site of the 2016 Olympic Games, to Indy.”

Local event partners
St.Vincent Sports Performance, the official healthcare provider for USA Gymnastics, is the local presenting partner for the 2015 P&G Championships, as the official medical and performance nutrition provider.

Georgia Street becomes “Road to Rio”
Fans and Hoosiers can enjoy fan activities and fun on Georgia Street on all four competition days, Aug. 13-16. Dubbed the “Road to Rio” in recognition of the 2016 Olympic Games, the fun ranges from face painting, photo opportunities, live art, food, live Brazilian entertainment to interactive activities for adults and kids alike. More detailed information will be announced in late July, but the Road to Rio schedule is: Aug. 13-14, 4:30-6:30 p.m.; Aug. 15, 3:30-6:30 p.m.; and Aug. 16, 11:30 a.m.-12:30 p.m. Gymnastics and the P&G Championships will also be part of some of the regular Georgia Street activities Aug. 12-14.

“Georgia Street is going to be fun family entertainment,” said Ryan Vaughn, president of the Indiana Sports Corp. “There really be something for everyone as Indianapolis once again celebrates a great event in the heart of our vibrant downtown.”

“Eating healthy is important for athletes and non-athletes alike,” said Ralph Reiff, executive director of St.Vincent Sports Performance. “Proper nutrition and a well-balanced diet can make a huge difference, whether you are training for the Olympics or enjoying daily activities. The selected menu items will have various designations that will help diners recognize entrees that can help them achieve their goals.”

Olympians Peszek, Phelps, Sloan celebration and other special honors
Phelps, who was a member of the Magnificent Seven who won the team gold medal at the 1996 Olympic Games in Atlanta, and 2008 Olympic team silver-medalists Peszek and Sloan will be honored on Aug. 13, when women’s gymnastics takes the stage. The Indianapolis Children’s Choir will perform as part of the Olympian celebration, including singing “Back Home Again in Indiana.” Thursday evening’s start time has been moved up to 7 p.m.

On Friday night, the 2015 induction class of the USA Gymnastics Hall of Fame will be recognized during the first night of men’s gymnastics, which also begins at 7 p.m.

For more information about the local partners, Road to Rio and celebration of Indiana’s Olympic gymnastics medalists, go to pgchamps.com.

Tickets may be purchased at Ticketmaster through www.ticketmaster.com, Ticketmaster charge by phone 1-800-745-3000 or at participating Walmart locations in Central Indiana and Bankers Life Fieldhouse Box Office. Tickets are also available at a discounted price through participating local gymnastics clubs. Prices vary depending on seat location, and listed ticket prices do not include applicable fees.