INDIANAPOLIS, April 13, 2015 – 2013-14 U.S. all-around champion Sam Mikulak of Newport Coast, Calif./Team Hilton HHonors (University of Michigan) made a quick trip to Indianapolis to promote the 2015 P&G Gymnastics Championships, scheduled for Aug. 13-16 at Bankers Life Fieldhouse in Indianapolis, site of the 2005 championships. Mikulak attend the Indiana Pacers-Oklahoma City (Okla.) Thunder basketball game, where he was interviewed and interacted with fans and Pacers mascot Boomer. 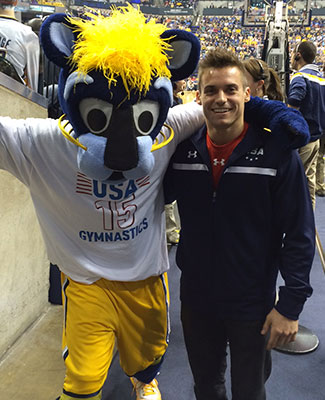 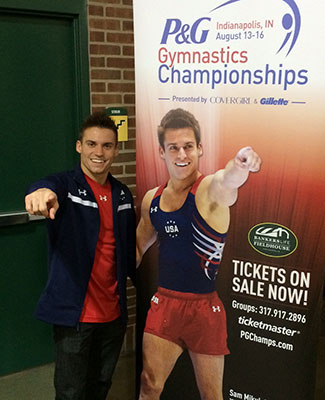 Tickets may be purchased at Ticketmaster through www.ticketmaster.com,Ticketmaster charge by phone 1-800-745-3000 or at participating Walmart locations in Central Indiana and Bankers Life Fieldhouse Box Office. Tickets are also available at a discounted price through participating local gymnastics clubs. Prices vary depending on seat location, and listed ticket prices do not include applicable fees.